Police in Germany have stopped dozens of armed, far-right vigilantes patrolling to stop migrants from entering Germany via the Polish border. Germany has sent hundreds of police officers to the border with Poland. 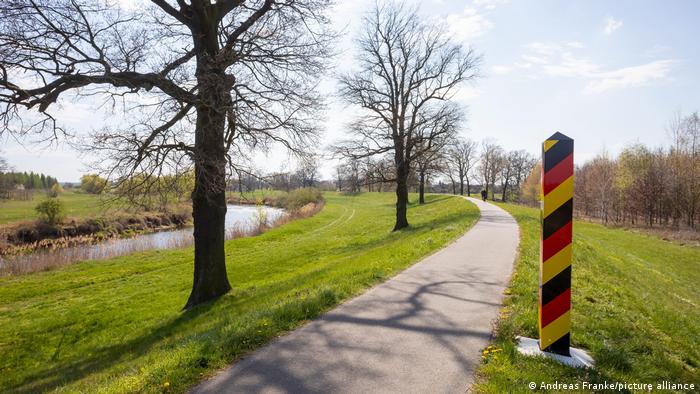 German officials on Sunday said they had stopped more than 50 vigilantes — armed with pepper spray, batons and other weapons — who were patrolling along the Polish border.

The group had answered a call by German far-right party The Third Way (Der Dritte Weg), which had urged members to stop migrants from crossings into Germany from Poland.

What did the police do?

Police said they had seized the group members' weapons, which also included a machete and a bayonet, near the border town of Guben. The individuals were banned from going near the border area.

The largest group, totaling about 30 people, was encountered near the village of Gross Gastrose.

Some members of the vigilante patrol had traveled from other parts of Germany — including Bavaria and Berlin — while others were more local.

Police said they had been responding to an appeal by the far-right party, a splinter group of the neo-Nazi NPD, that is particularly active in Germany's eastern states.

It called for "border walks" to stop migrants — many from Iraq and Syria — from entering Germany.

Both members of the Schengen free-travel zone, there are normally not any controls on people traveling across the German-Polish border, but those checks can be temporarily reinstated in the event of a threat.

Dozens of people in the town of Guben — where Germany and Poland are separated by the Neisse River — held a vigil on Saturday to show opposition to the far-right patrols.

"We don't want to leave the region to the neo-Nazis," said a statement from the organizers. "We want to send a signal that asylum is and remains a human right."

Germany has deployed an extra 800 police officers on the Polish border to control the flow of migrants trying to enter Germany.

"Hundreds of officers are currently on duty there day and night. If necessary, I am prepared to reinforce them even further," German Interior Minister Horst Seehofer told the Bild am Sonntag newspaper.

Seehofer said Germany had already recorded some 6,162 unauthorized entries from Belarus and Poland this year.

Poland has suggested constructing a €350 million euro ($410 million) wall on its border with Belarus to keep migrants out.

Asked if border walls were needed, Seehofer said: "It is legitimate for us to protect the external border in such a way that undetected border crossings are prevented."

Belarus hits back at sanctions

Migrants have been entering the European Union from Belarus via Poland, with EU states accusing Minsk of sending them in an effort to put pressure on the bloc.

Belarusian strongman Alexander Lukashenko has said his country will no longer stop migrants from using it as transit to enter the EU.

Belarus is under sanctions from Brussels for its crackdown on protesters who rejected elections held last year as fraudulent.