Police in the German capital have seized more than 18 kilograms of crystal meth, along with a heavy assortment of other drugs, amounting to over €4 million. 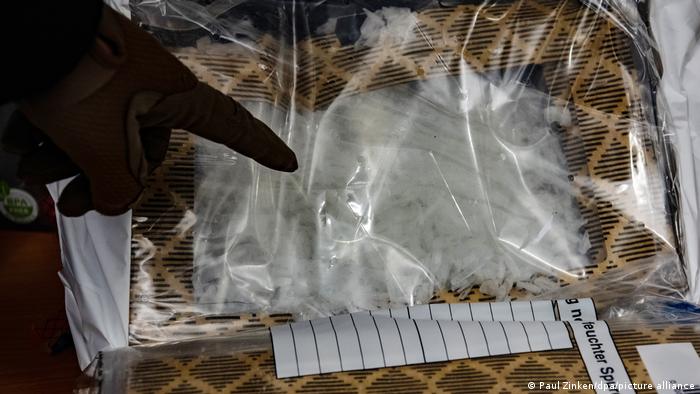 German customs officials in Berlin on Thursday said they seized more than 100 kilograms (220 pounds) of drugs in a raid carried out in different locations in the capital on Tuesday.

Along with more than 18 kilograms of crystal methamphetamine, the raid netted nearly 30 kilograms of cocaine, 47 kilograms of ecstacy, and 2 kilograms of cannabis. Officials said the estimated street value of the drugs amounts to €4.2 million.

Officials said the meth haul is the largest ever in Berlin and the surrounding state of Brandenburg.

Three suspects, aged 61, 51 and 40, were arrested, and are currently in police custody.

What are the details of the drugs raid?

Customs officials said the drugs had been smuggled into Berlin from the Netherlands and Poland. The suspects were said to have stored the drugs in several apartments in Berlin, which they had rented under false identities.

Two of the suspects were arrested while leaving one of these apartments in the Berlin district of Charlottenburg.

The raid involved more than 100 police special forces officers, and the drugs were seized in several locations, including cars.

Investigators said the drugs were likely to be distributed and sold around Berlin via a network of middlemen and small drug dealers.

Berlin public prosecutor Günter Sohnrey said that the huge meth haul is a sign that the drug is increasingly being distributed in the city.

Sohnrey added that the bust is part of a trend in which large amounts of meth are being produced in the Netherlands.

In July, Dutch police busted what they called the "biggest and most professional" drug production site ever discovered in the Netherlands, which had been capable of producing more than 100 kilograms of meth a day.