A court has instituted an alcohol ban at a neo-Nazi event taking place in Ostritz, a town in Saxony. Police intervened after a right-wing musician put on a balaclava during a concert. 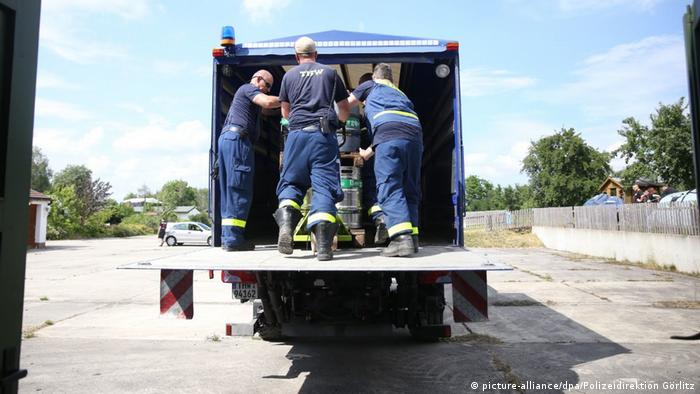 German police in the eastern German state of Saxony confiscated 4,200 liters of beer on Friday after a court prohibited a right-wing extremist event from serving alcohol.

Organizers of the "Schild und Schwert Festival" ("Shield and Sword Festival") had insisted that past events had taken place peacefully even with the consumption of alcohol. But the high administrative court (OVG) in Bautzen, east of Dresden, ruled that alcohol could increase the likelihood of violence.

The festival took place in Ostritz, a town in Saxony on the German-Polish border, from Friday to Sunday. There was a large police presence during the event.

Officers from the nearby city of Görlitz were supported by federal police and riot squads from Saxony and other German states. A 33-year old bass-player who put on a balaclava during a concert was interviewed afterwards by police. An investigation has begun for a possible violation of the law of assembly.

About 750 people registered to participate in the event, which featured concerts with right-wing extremist bands. In the event, police said about 600 people took part. Around midnight on Saturday in Ostritz, there were fewer than 500 people around the central rail station.

Police announced they would be present for the third and final day, Sunday, as the event comes to an end. One of their tasks was to ensure a safe departure for all the participants.

The OVG in Bautzen also barred a demonstration organized by the protest initiative "Rechts rockt nicht" ("Right does not rock") from taking place near the festival, citing safety concerns.

The counterprotest planned to demonstrate at the Hotel Neisseblick, which is within sight and hearing distance of the concert. The hotel is located down a dead-end street.

The court justified the ban by saying that authorities would not be able to keep order and security if clashes were to break out. It also said that rescue and emergency vehicles might not be able to access the area.

However, the small eastern German town is holding other events that coincide with the right-wing festival. One of them is the celebration of the 100th anniversary of Ostritz BC, an amateur soccer team that plays in Germany's ninth tier. The celebration includes soccer tournaments during the weekend.

Michael Kretschmer, Saxony's state premier, said the eastern German state will do anything in its power to combat right-wing extremism.

"I am very impressed with how in such a small town ... the citizens stand up to make it clear that right-wing extremists are not wanted here," Kretschmer was quoted by German news agency dpa as saying.