Herlinde Koelbl, one of Germany's best-known photographers, spent months in refugee camps in Europe for her current photo exhibition. Her poignant snapshots tell the stories of thousands of people.

Even the title of the exhibition at the Munich Literaturhaus causes one to take notice: "Refugees. A Challenge for Europe" is written on a poster at the museum's entrance. On the poster is a man wrapped in a shining gold rescue blanket. He appears to be on the way to use one of the portable toilets that line the arrival areas of reception centers. The man faces the photographer, as if taken by surprise by the camera.

Photographer Herlinde Koelbl took the photo in 2016. In an interview with DW, she explains how it came about. "The buses to the longed-for new life in Europe were ready and waiting. The refugees were already registered and everything was ready to go. I was there accompanied by UNHCR with a few press photographers. After all the media fuss was over, they all left."

Koelbl, however, remained on the Sicilian coast where, week by week, dramatic events continued to take place. "I'm interested in the moment when everything is cleared away and less-obvious events occur. I deliberately stick with that." 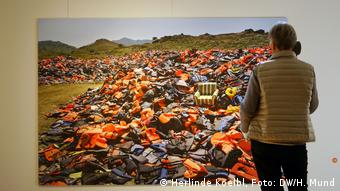 The space was not always suitable for so many human beings, she recalls. In Hamburg during the high point of the arrival of refugees in 2016, barracks, airplane hangars and tennis halls were transformed into initial reception centers. A young woman told her that she lived in a tennis hall for eight months. There was hardly any privacy: "Many try to cover up their bunk beds with a sleeping bag or a blanket so you can't see everything. They live and sleep like that."

Women often sought to provide a comfortable atmosphere immediately after arriving in the reception centers. This provided children with at least some security. "Here in Germany they have at least a small space for themselves with a door or a curtain that can be closed. They don't live in bunk beds like in refugee shelters in other countries. Here they have at least something that they can return to, even when it's just five-by-five meters," says Koelbl.

Herlinde Koelbl has long established herself internationally as a photo artist, not a reporter. For her, that's an entirely different profession. "I told refugees I am taking photos for an exhibition, which is something else. I designed this exhibition for the European Council and for the International Day of Refugees, which means they understood my work in a different context." Refugees often react "allergically" to invasive reporters. 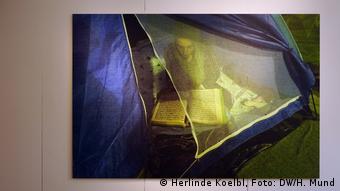 Many refugees living in camps have very little private space

The photographer, who hails from Munich, takes a cautious approach to her work and often works with an interpreter by her side. She tries to read between the lines to determine if a protagonist finds being photographed unpleasant. "People are looking at me with the camera, and if they shake their heads I move on. It was often that some spoke English or someone came by to offer English skills, so we could converse a little."

Walking through the carefully hung exhibition, one's gaze is likely to rest on small, yet touching details, like little mementos that refugees have taken from their countries under dire circumstances. In large and often impersonal emergency accommodations, photos can show a bit of private life.

"I photographed this in Athens at the harbor. There, there are wild camps where people really live in just small tents scattered on asphalt," says Koelbl. "And this woman sat in her tent and read her book. Those are the moments in which human beings, despite harsh conditions, set up their little lives. In that moment I thought to myself, how did she do it?"

Paying attention to the weakest

The photographer, who always curates and designs her own exhibitions, deliberately grouped a photo series of those most affected by the journey, violence and the helplessness of home sickness. "One sees how the children play with knives and sharp saws. If you look closely, you can see the pure aggression in their faces, almost brutalization." 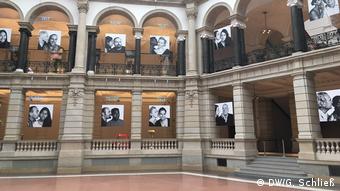 In this exhibition, photographed on behalf of the European Council, she wanted to show that children suffer most from the refugee situation. "One sees what the children have gone through, including after the journey. You see a certain brutality in their faces. However, there are women who are pregnant and babies being born. Life continues in refugee shelters as well."

Fleeing war-torn Syria, painter Majd Kara found himself in Lithuania where half the population says they refuse to help asylum-seekers. Now holding his second exhibition, Kara is changing the country's attitude. (28.11.2016)