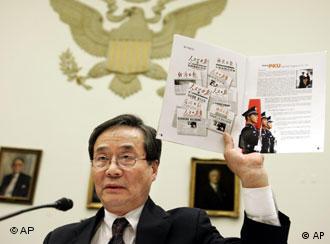 Germany's parliament, the Bundestag, appealed for the Laogai labor camp in China to be closed down. The declaration, which was approved by a wide margin, condemned forced labor and child labor, as well as the use of torture, over-exhaustion and malnutrition as methods of punishment.

The motion also called for goods produced in labor camps to be identified with special labels.

Only the Left party parliamentary group voted against the declaration, which they said didn't go far enough toward upholding human rights.

The Chinese embassy in Germany has protested against the motion, which was brought by all of Germany's main political parties.

"We are opposed to irresponsible statements concerning China's domestic affairs from any country, including from the German parliament," said a statement from the embassy published in Germany's Tageszeitung daily. 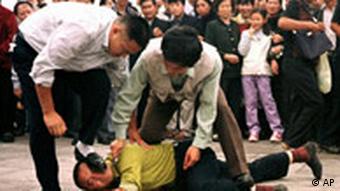 As a religious minority, Falun Gong members are subject to persecution in China

The use of labor camps is "not a criminal act, but a legitimate way to ensure public security and prevent crime," the statement said.

One of the most outspoken Chinese dissidents, Harry Wu, came to Berlin Thursday as a guest of the speaker of the Bundestag lower house of parliament, Norbert Lammert.

In a conversation with Wu, Lammert said that Germany respected the internal affairs of other countries, but that basic rights were a matter of international concern, according to German news service dpa.

Harry Wu spent 19 years in a Chinese prison camp and later became a US citizen. He heads a group in Washington that researches the camps and the products made in them.

International human rights groups estimate there are more than 1,000 labor camps with between four and six million inmates, presumed to be mainly political dissidents and members of ethnic and religious minorities. Campaigners say prisoners are subjected to long working hours, dangerous working conditions and poor diets.

Germany needs to use its influence to improve individual freedoms in China and Russia, human rights activists said. The call came as an EU report highlighted ongoing human rights failings in various countries. (27.04.2007)

Germany to Ward Off China as Export Champion, For Now

Germany should be able this year to defend its title as the world's export champion against a challenge from China, said Germany's leading trade association. (31.03.2007)

Can China Kick the Habit?

China is the world’s second biggest producer of greenhouse gases and in a few years time is set to overtake the United States at the top of the ladder. But China is also heavily investing in renewables. (14.03.2007)

A spokesperson for the Beijing local organizing committee has dismissed alleged human rights abuses in Xinjiang as "lies." She also used a press conference to promote Beijing's "One China" policy.

Michelle Bachelet is making a landmark trip to the region, where Beijing is alleged to have repressed Muslim minorities. China said it's hoping the visit can "clarify misinformation."