People who have been fully vaccinated or have recovered from the coronavirus could soon enjoy fewer rules when shopping and meeting up with friends. Restrictions are one step closer to being dropped. 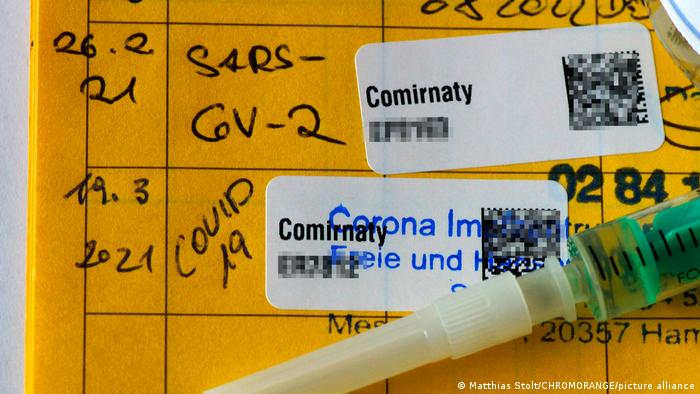 The rules would kick in two weeks after the final vaccination

The German parliament on Thursday passed new rules that gives special privileges to people who have been vaccinated against or have recovered from the COVID-19.

The law is expected to pass the Bundesrat, the upper house, on Friday, potentially allowing the rules to come into force on Saturday.

What would the new rules mean?

Current curfews and contact restrictions will cease to apply to fully vaccinated or recovered people. This includes the lifting of restrictions on private meetings between eligible people. They would not count towards contact limits in meetings with other people.

In other areas — such as shopping or visiting the hairdresser — they will be treated the same as people who have tested negative.

They would still have to wear masks and keep their distance and would still be unable to visit restaurants and hotels, because they are still closed in most federal states.

Quarantine obligations would also be lifted.

It applies to people who have received the final vaccine dose at least 14 days ago, and to anyone who has recovered from COVID-19 between 28 days and six months ago and has a PCR test to prove it.

Who supports the bill?

Angela Merkel's ruling center-right CDU/CSU party and their coalition partners, the center-left SPD, both supported the bill, as did the Greens and the Left. The business-friendly FDP abstained, the far-right AfD rejected the regulation.

Federal Justice Minister Christine Lambrecht called the rule an "important step and an imperative for the rule of law."

Lambrecht justified the rule by saying that basic rights had to be returned. This is an "important step and a constitutional imperative." She urged citizens to work "responsibly" to ensure that everyone could soon return to normality.

The FDP criticized the bill as insufficient, citing the fact that hotels, restaurants and fitness studios would be completely excluded.

How many people are vaccinated?

According to the Robert Koch Institute for infectious diseases (RKI), 30.6% of the German population has received at least one vaccine. Some 8.6% of the population are fully vaccinated.

Vaccinations have picked up pace in Germany, with the country twice hitting 1 million vaccine doses given in one day.

As vaccinations increase, Germany is experimenting with tourism in one of its most-visited coastal regions. The popular island of Sylt and other resort areas are allowed to welcome guests — under strict stipulations.