German opposition: support for Afghan military mission hinges on withdrawal | Germany| News and in-depth reporting from Berlin and beyond | DW | 26.12.2010

The leader of Germany's opposition Social Democrats has said his party will not back an extension of the country's Afghanistan troop deployment without concrete moves to scale down the Bundeswehr's mission. 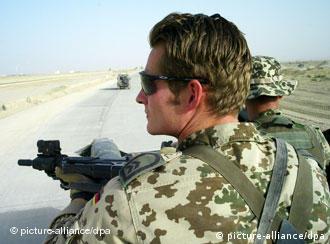 Germany has just under 5,000 troops in Afghanistan

The leader of Germany's Social Democratic Party (SPD), Frank-Walter Steinmeier, said on Sunday that his party's support for an extension of Germany's troop deployment in Afghanistan depended on a withdrawal beginning next year.

"The mandate must include the beginning of a withdrawal in order for the Social Democrats to give their approval," Steinmeier told the Bild am Sonntag newspaper, adding that such a stipulation was "a question of credibility."

"The beginning of a withdrawal of German soldiers is already specified in the 2010 Afghanistan mandate," the opposition leader said. "This must be underpinned in 2011 by concrete actions. Actions speak louder than words."

What’s in a name? 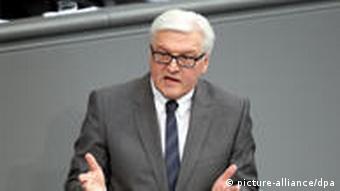 Steinmeier says the SPD has turned over a new leaf

Steinmeier went on to criticize Chancellor Angela Merkel for using the word "war" to describe the situation in Afghanistan during her latest visit to the country.

German politicians have traditionally specified that the Bundeswehr is involved in an "armed conflict" rather than an all-out war.

"There is absolutely no question that this mission in Afghanistan is dangerous and we have many victims to mourn. The government needs to expend less energy on media relations and more energy on preparing for an end to the mission," the former foreign minister said.

Germany currently has around 4,800 troops stationed in Afghanistan as part of the International Security Assistance Force (ISAF). The Bundeswehr deployment remains deeply unpopular in Germany.

Steinmeier also addressed the ongoing poll troubles of Merkel's Christian Democrats (CDU), saying there was a good chance the SPD would gain the upper hand on the CDU in the new year.

"We are moving into the new year with a lot of momentum and have the goal of making the SPD the strongest political force in Germany once again," he said, adding that an SPD partnership with the Greens would garner more public support than the current government coalition between the CDU and liberal Free Democrats.

"We want to win elections," Steinmeier said. "We are in a good starting position. We have done a lot of cleaning in our own store and have uncovered many errors made by the government."

Chancellor Angela Merkel has said the attack that killed a German aid worker in northern Afghanistan shows how little faith the Taliban has in the future of the country. (25.12.2010)