Relations between Armenia and Turkey have been tense for decades. But students from both countries are working to improve ties, looking to Germany's reconciliation with the Jewish people and other groups for guidance. 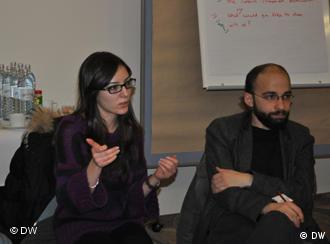 The students found much in common through discussions

Dusk at Berlin's Memorial to the Murdered Jews of Europe is an eerily beautiful sight. One recent evening, it was also host to an unusual mix of visitors.

A group of Turkish and Armenian students went to the memorial to walk through its somber rows of concrete slabs together. It was a striking scene, given that Armenians have long accused Turks of committing genocide themselves.

The visit was part of a weeklong trip that about 20 Turkish and Armenian students made to Berlin to study the German experience of reconciliation with the Jewish people, the French and the Polish. The students also visited a concentration camp, the German parliament, the archives of the German Foreign Ministry and other sites.

The itinerary seemed to invite comparison between the Holocaust perpetrated by Germany in World War II and Ottoman Turkey's massacres of Armenians around World War I. That is a tough charge to swallow, but it was not news to the Turkish students, who had been studying the issue.

"I'm also bitter towards Turkey," said Turkish university student Eda Tarak. "I don't feel offended when I hear something bad about Turkey, because I'm also criticizing Turkey [over its public handling of the massacres]".

Another Turkish student, Burcu Ege, said visiting places like Berlin's Jewish Museum gave her ideas about how Armenians and Turks can reconcile.

"They [Germans] seem quite open to this healing issue," she said. "I would like to see places like this in Turkey, too." 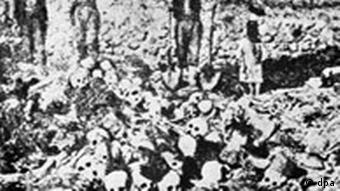 Turkey has disputed the number and nature of the killings

Early 20th century massacres of Armenians by Ottoman Turkey are a subject of heated debate to this day. Many scholars agree Ottoman Turkey ordered the deaths of more than 1 million Armenians during World War I, with Armenians marking April 24, 1915 as the start of the killings.

In spite of strong protests from Turkey, governments including France, Belgium and Russia have recognized the events as genocide. Turkish officials have acknowledged some killings, but have said they took place in an Armenian rebellion and that at least as many Turks died during the same period.

Turkey and Armenia still have no diplomatic ties, and their border is closed. Political talks on normalizing relations have stalled, but in 2009 the German Adult Education Association (DVV) started working towards building bridges between students.

Within Germany, DVV promotes community colleges that offer skills training and job qualifications to adults. Outside Germany, the organization has projects in areas ranging from basic literacy to intercultural dialogue in more than 40 countries.

The role of oral history

In 2009, DVV organized a project for students in Istanbul and Armenia's capital Yerevan to research first- and secondhand oral accounts of early 20th century interactions between Armenians and Turks. That work went into both a book and a museum exhibit that is touring Turkey and Armenia. Since 2009, the students have also participated in several conferences together. 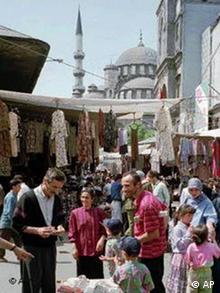 Turkey is home to a large Armenian population

In the process, the Armenian and Turkish students, who speak to each other in English, have spent a lot of time working side-by-side. And DVV's Matthias Klingenberg said that interaction is crucial.

"The main challenge is that most Armenians and most Turkish people have never seen a real Turk or a real Armenian from the Republic of Armenia," said the coordinator for DVV's projects in Asia. "You need to get to know each other, and then you can start to talk about problems."

Armenian student Seta Grigorian said the project marks the first time she has regularly interacted with Turks, and that their work has gone smoothly.

"It was interesting that we could notice that both Turks and Armenians have a very similar culture," she said. "It's not actually difficult for us to work together."

However, another Armenian student said he has been struggling with broader questions about his country's relations with Turkey. Avedis Keshishyan said the Berlin trip gave him food for thought, but in the Turkish-Armenian case, acknowledging genocide so long after it happened might be ineffectual. 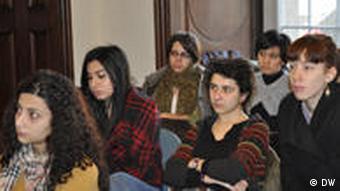 Listening to one another is the project's leitmotif

"This slow process doesn't work for the good of reconciliation because there is nobody to reconcile with," he said. "The real victims and the real perpetrators are already dead. If somebody from Turkey apologizes, do I have the right to accept or deny it?"

Nevertheless, Leyla Neyzi, who teaches anthropology at Istanbul's Sabanci University, is optimistic about the impact projects like DVV's could have in Turkey. She accompanied her students on the trip to Berlin.

"Ordinary people might begin to recognize that the history they were taught is extremely one-sided and limited," she said. "Civil society in Turkey will put pressure at the political level to change the official line."

At the end of the week in Berlin, Grigorian summed up what many students got out of the trip.

"I learned about the German-Jewish experience of reconciliation," she said. "I wasn't quite familiar with the process. It was interesting to see how German society came to the mood of reconciliation."

Armenians are marking the 95th anniversary of Ottoman-era mass killings of Armenians amid fresh tensions with Turkey over stalled peace efforts. (24.04.2010)

With the current set of peace accords designed to restore relations between Armenia and Turkey suspended, the US faces a struggle to reopen negotiations to end the long-standing conflict in the strategic South Caucasus. (23.04.2010)