German museum's disputed Mondrian works to be exhibited and investigated

Krefeld's museum said it would soon show the four disputed artworks by Dutch artist Piet Modrian. His heirs have demanded the works be handed over to them, and claim they had been deliberately concealed. 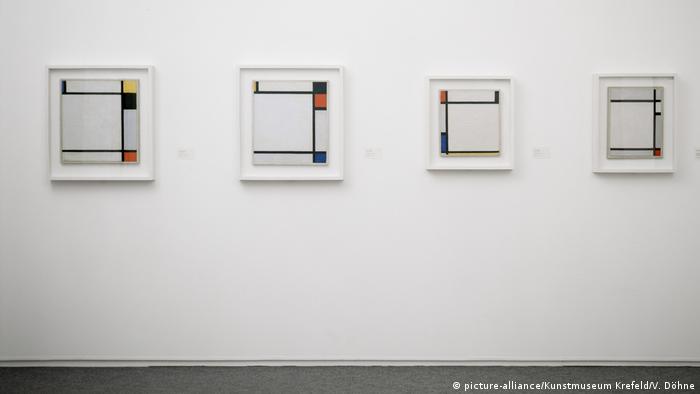 The four paintings in question in the Krefeld museum

A spokesperson for the Kaiser Wilhelm Museum in the western German city of Krefeld said Friday that the art institution would display the disputed artworks, but an exact date has not been set. This was in response to several inquiries into the works.

Earlier in the week, the museum said it would probe into the provenance of the works. However, it rejected allegations by lawyers for Mondrian's heirs that the presence of the paintings at the museum had been deliberately concealed.

Christoph Elles, a spokesman for the city of Krefeld, told the Associated Press that the museum believes Mondrian himself donated the eight works in 1929, perhaps for an exhibition that never took place, though there is no clear evidence of that. The works came to light during the 1950s, when they were catalogued in the museum's collection. Four of the eight works were then exchanged for others.

Gunnar Schnabel, the lawyer for the heirs based in the United States, questioned whether the donation was valid and said the museum had illegally sold four of them, a dispute first reported on by The New York Times at the beginning of the week.

Mondrian never reclaimed the works himself. However, Schnabel told AP in a statement that it would have been impossible for Mondrian to even try because they had been deemed "degenerate art" by the Nazis after they seized power in 1933. Mondrian emigrated to the United States from Europe, dying in exile in New York in 1944.

Mondrian is considered one of the greatest artists of the 20th century and a pioneer of abstract art. Moving away from figurative painting, he engineered a simple, geometric style of black lines and blocks filled with bright colors.

The Krefeld museum said it would commission an expert with researching the disputed history of the eight works.

A Dutch painter and his classical masterpiece. Mondrian's compositions relied only on the colors red, black, yellow, blue and grey. The 1921 work by the Dutch painter is celebrated by designers. (13.05.2016)

The much-debated "Birkenau" series by renowned painter Gerhard Richter is now on display at the Reichstag building in Berlin. The dark, abstract work is on loan and can be seen in the parliament's entrance hall. (04.09.2017)

With his abstract forms and bold colors, Wassily Kandinsky was a revolutionary. Hated by the Nazis, he not only painted, but taught other artists to think outside the box. He was born 150 years ago on December 4. (02.12.2016)