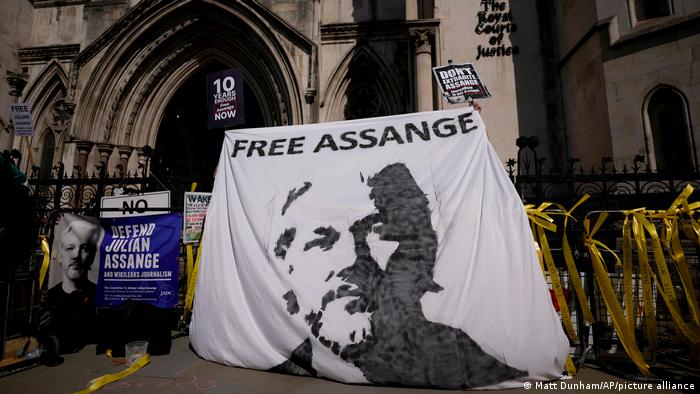 More than 70 members of the German parliament from four political parties have called on US President Joe Biden and the British government to stop the impending deportation of Wikileaks founder Julian Assange from the UK to the US to face espionage charges.

"Journalists must not be persecuted or punished for their work anywhere in the world," the Bundestag deputies wrote in an open letter. "In the interest of press freedom as well as for humanitarian reasons in view of his poor state of health, Julian Assange must be released without delay."

Assange has been imprisoned in the UK since April 2019, when the government of Ecuador, which had hosted him in its London embassy for seven years, withdrew his political asylum.

UK approves Assange extradition to US

"A free press is one of the fundamental components of each and every democracy," the Bundestag members wrote. "We are very concerned about the deterrent effect that Assange's extradition and conviction could have on press freedom and investigative journalism around the world."

Members of all three German government coalition parties have signed the letter — the center-left Social Democrats (SPD), the Greens, and the neoliberal Free Democrats (FDP) — as well as several representatives of the opposition socialist Left Party. The letter was not signed by members of the opposition conservative Christian Democrats (CDU) or the far-right populists from the Alternative for Germany (AfD).

In a statement to DW, one of the signatories, SPD human rights spokesman Frank Schwabe, said: "The situation is very clear. Julian Assange does not belong in a prison, and he certainly shouldn't be deported to a country where he is threatened with a draconian punishment. … For me this is a question of the credibility of our important mutual understanding of human rights."

Christian Mihr, head of the German branch of Reporters Without Borders, said he hoped the German government would take the parliamentarians' message on board. "I hope the government recognizes it ... when elected representatives send such a strong signal, and that they take it seriously and position themselves clearly to Joe Biden," he told DW.

Should he be found guilty under the Espionage Act, Assange could face 175 years in prison in the United States. Through the Wikileaks platform, Assange was instrumental in leaking evidence of alleged war crimes committed by the US military in the Iraq and Afghanistan wars. Wikileaks also published confidential Democratic Party emails during the 2016 US election campaign.

Swedish prosecutors issued an arrest warrant for Assange on sexual assault allegations in 2010, though the investigation was eventually dropped when the statute of limitations expired while he remained in the Ecuadoran embassy.

In 2019, the UN special rapporteur on torture, Nils Melzer, visited Assange in Belmarsh prison in London and concluded that his treatment by the UK, US, and Ecuadoran governments amounted to psychological torture.

DW has reached out to the German Foreign Ministry for a reaction. So far, the German government has held the position that it has no reason to doubt the integrity of the British extradition process.

A petition opposing the "psychological torture" of Assange has been approved by the Bundestag's petitions committee, the Left Party parliamentary group announced in Berlin on Wednesday. Left-wing politicians see the committee's vote as a demand that the German government take action to secure Assange's release.

This is a breaking news story and will be updated as more reactions come in.

Opinion: A blow for Julian Assange and for press freedom

Journalism is not a crime. But now a court in London has ruled that Julian Assange's extradition to the United States is legal. It's a devastating day for press freedom, writes Matthias von Hein.