The German parliament has approved plans for a new military mission in Afghanistan. The new mission is to see several hundred German soldiers help train members of the Afghan security forces. 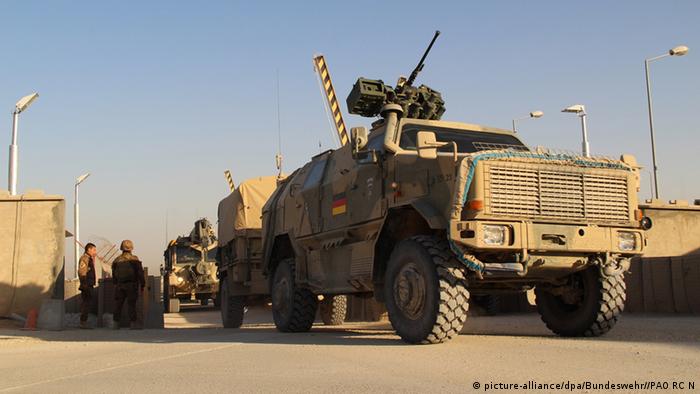 The outcome of Thursday's vote was never in doubt as the Bundestag lower house of parliament is dominated by the grand coalition of Chancellor Angela Merkel's Christian Democrats and their coalition partners, the Social Democrats. The measure passed with 473 yes votes, 102 no votes and 18 abstentions.

During the debate that preceded the vote, Defense Minister Ursula von der Leyen stressed that the German soldiers who will be deployed on the mission beginning next month, would not be in Afghanistan in a combat role.

Von der Leyen said the Bundeswehr troops would be involved in the training of Afghan in "secure facilities," in the capital, Kabul and the northern town of Mazar-i-Sharif.

The mandate approved by the Bundestag on Thursday provides for the deployment of up to 850 German troops to Afghanistan as part of the "Resolute Support Mission" for a period of one year. The current mission, which expires at the end of year, had provided for up to 3,300 Bundeswehr soldiers to be stationed in the country as part of the NATO-led ISAF mission.

Resolute Support is to be comprised of some 12,000 troops, including around 9,800 Americans.

Another year of Active Endeavour

The Bundestag on Thursday also approved the German military's participation in the NATO mission "Operation Active Endeavour" on the Mediterranean Sea for a further year. Lawmakers approved the extension by a vote of 461 to 122, with three abstentions. Germany contributes patrol ships to the mission, which evolved out of the 9/11 attacks in the United States in 2001 and is aimed at deterring terrorist activities.

New ombudsman for the armed forces

Also on Thursday, lawmakers also voted to appoint Hans-Peter Bartels of the Social Democrats as the Bundestag's new commissioner for the armed forces. Bartels appointment was approved by a large majority and he is to replace the Free Democrat, Hellmut Königshaus, whose five-year term in the post is about to expire. The liberal Free Democrats were excluded from the Bundestag after they failed to clear the five-percent hurdle in last autumn's general election.

A senior supreme court official has been killed by Taliban gunmen on his way to work in Kabul, as demining workers and US soliders also came under fire. This coincided with German Defense Minister von der Leyen's visit. (13.12.2014)

In the middle of Berlin, the German defense minister is opening a new showroom. The aim is to bring more young people into the Bundeswehr's barracks - but there were a few uninvited guests at the grand opening. (20.11.2014)