Three German photo journalists who were being held in south-eastern Turkey have been released. They had been arrested by police in Diyarbakir on Saturday. 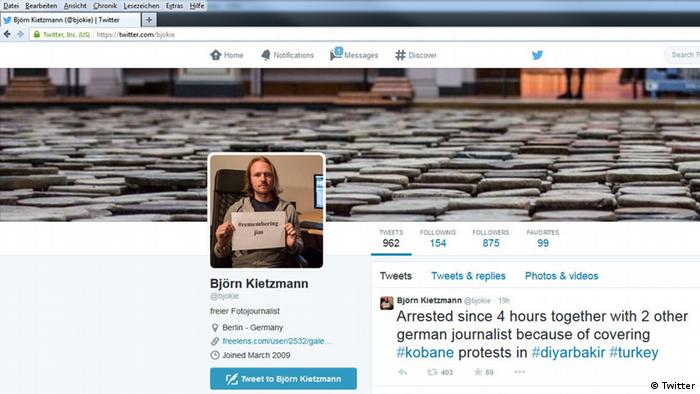 Björn Kietzmann and Chris Grodotzki announced their and their colleague Ruben Neugebauer's release on Twitter on Monday.

The three journalists from the northern German city of Hanover were released 31 hours after they had been detained in the south-eastern Turkish town of Diyarbakir. They have been taken to their hotel and are facing questioning by prosecutors in Diyarbakir, according to tweets from the journalists themselves as well as the Kurdish Center for Public Relations.

The media rights organization "Reporters without Borders" has also confirmed their release.

The three photographers were in the Kurdish-dominated region to report on public protests against the terrorist group "Islamic State" (IS), its occupation of the Syrian town of Kobani, and the Turkish government's response to the situation. Turkish police accused the reporters of spying and provocation. The freelance journalists work for several magazines and a news agency.

Clashes between supporters of the outlawed Kurdistan Workers' Party (PKK) and police have led to at least three dozen deaths in southeastern Turkey in the past weeks. They followed protests over the perceived inaction of the Turkish government with regards to the situation in Kobani.

In response to the unrest, Turkish President Erdogan has vowed to "clear vandals from the streets."