Following the recent death of the Mormon's spiritual leader, a German pilot has joined the highest leadership of the Church of Jesus Christ of Latter-day Saints by becoming one of two counselors to the new Mormon head. 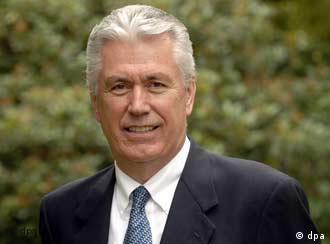 Uchtdorf: "Germany needs to rediscover the importance of marriage and family"

Dieter Uchtdorf's appearance doesn't immediately hint at anything unusual. This 64-year old, who worked as chief pilot for Germany's Lufthansa airline dresses conservatively but smartly. His countenance is one of open acceptance.

He could be any ex-professional retiree. But Uchtdorf is something a little out of the ordinary. He is Germany's first member of the Mormon's so-called First Presidency, which is made up of a president, of prophet and two counselors.

According to the beliefs of the Church of Jesus Christ of Latter-day Saints (LDS) -- the official title of the Mormons -- God chooses "apostles" to lead the church in modern times as he did in the time of the bible.

After the death of long-time leader Gordon B. Hinckley on Jan. 27, Thomas S. Monson was chosen as his successor on Monday, Feb.4. He appointed Uchtdorf as one of this advisors, lifting the German -- already part of the Mormons' inner circle as one of the so-called 12 apostels -- to the highest authority of the church.

It was the late Hinckley and the 12th leadership committee who decided that Uchtdorf would be one of the 12 "apostles" who act under the presidency of the church. A new appointment to this position comes after the death of a previous member and so it was with Uchtdorf's appointment.

Refugee who rose through the Mormon ranks

Uchtdorf's rise to the upper echelons of the LDS Church is one marked by great upheaval in his life. He was twice a refugee as a child; firstly as an expellee from the former Czechoslovakia at the end of World War II and again in 1951 when his family had to flee East Germany because of his father's political leanings.

Brought up in a Lutheran setting, Uchtdorf was converted to the Mormons by a family friend. During his youth, he experienced the usual teasing and isolation although his beliefs helped him during his compulsory military service.

"The army was just very glad to have driver who didn't drink alcohol," he told DPA news service.

In later life and during his professional career, Uchtdorf said he experienced mild curiosity and respect from his peers. 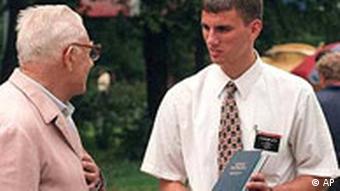 A Mormon missionary in Russia

There are just 40,000 members of the LDS Church in Germany and the church has found itself labeled a sect by many, a title that Uchtdorf rejects.

"A sect would be something which has split from the church," Uchtdorf said. "We want to reunite the church."

The modern day Mormons grew from the creation of the LDS Church in 1830 when it was founded by the first "prophet" Joseph Smith, who translated the Book of Mormon -- an alternative account of the life of Jesus written by ancient prophets -- and set-up the basis for the worldwide organization which now boasts 12 million members.

"For us, these 10 orders are God's reality," Uchtdorf said, adding that the family is sacred. Mormons also oppose gambling, abortions, sex before marriage and drugs of any kind, including alcohol and cigarettes and even coffee and tea.

Mormons under criticism from other churches

Certain aspects of the LDS Church repeatedly come under criticism mainly from the Protestant and Catholic churches, something that Uchtdorf said he finds hypocritical.

"If you want to know the truth about the SPD (Germany's Social Democrats), you don't ask the CDU (the conservative opposition)," he said. 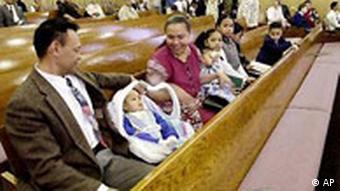 A family attend Sunday mass at the 6th ward of the Church of Jesus Christ of Latter-day Saints in Taylorsville, a suburb of Salt Lake City.

Uchtdorf added that he believes that it is much easier to be a Mormon in the United States than it is in Germany and the rest of Europe. The freedom to worship is more accepted in the US due to Europe's history of the state abusing the power of religion, according to Uchtdorf.

He also said he believes that Germany could learn a lot from the Mormons, in particular the rediscovery of the sanctity of marriage and the importance of the family. But the United States, he added, could also learn how to be more supportive and how to reduce its egoism.

In a new ruling, the Federal Constitutional Court says the government has a right to warn its citizens about products it suspects may be harmful and groups espousing "pseudo-religious" or "destructive" ideas. (July 31, 2002)

The Mormons believe that their families live eternally in a genealogical circle. That's why researching and documenting family roots is so important to them.