The president of the Central Council of Jews in Germany has said that the country was seeing a groundswell of right-wing violence which reminded her of the Nazi era. 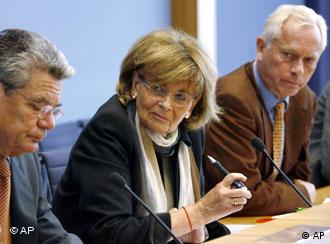 "Anti-Semitic and far-right attacks have become so blatant and
aggressive that it brings to mind the years after 1933" when Adolf
Hitler come to power, Charlotte Knobloch told a conference on right-wing extremism in Berlin on Tuesday.

Knobloch, a Holocaust survivor, said authorities appeared "at a loss" to cope with the increasing popularity of neo-Nazi parties that have gained a following among the poor in the former communist east of the country.

She urged police and the courts to take a "hard line" towards extremists, whose message, she said, has "become firmly entrenched in certain spheres of our society."

Together with Uwe-Karsten Heye, a former government spokesman and chairman of the anti-racism organization called "Show Your Color" who raised a stir ahead of the World Cup by talking of "no-go areas" for foreigners, Knobloch said what was needed was a "democracy summit" to thrash out further measures to deal with the growing problem of right-wing extremism.

Germany has in the past two years seen right-wing crimes
increase steadily and support grow for neo-Nazi parties as they
successfully exploited unhappiness with high unemployment and
hostility towards foreigners.

New figures compiled by the Interior Ministry show a 20 percent increase in racial crimes committed by the far-right. The results of the research come less than a month after the far-right National Democratic Party posted strong results in regional elections.

The extremist NPD won enough seats in last month's elections to gain admission to the regional assembly in Mecklenburg-West Pomerania. It is the second eastern German state where the party is represented. The other is Saxony.

Statistics published last week showed that there were more 8,000
crimes linked to the far-right reported from January to the end of
August 2006, an increase of 20 percent compared to the same period in 2005.

Israel's ambassador to Germany, Shimon Stein, said this was proof that these rightist parties can no longer be considered marginal. In a newspaper interview published over the weekend, Stein said he was concerned that Jews do not feel safe in Germany.

Uwe-Karsten Heye said the time has come to think about finally implementing a national action plan against right extremism.

However, that comes with a price. "Whoever takes the integration of foreign teenagers seriously and wants to stop the rising number of young men joining far-right groups has to invest heavily in kindergartens, schools and social work," he said.

Knobloch welcomed the fact that the German government had decided to raise funds earmarked to fight right-wing extremism.

"I believe, now that we have the financial means, through the government funding made available --which comes to about five-million euros -- that we are on the right path," she said.

Others are "against Neo-Nazis," as this t-shirt says

"But this money has to be invested in the right places and it’s important that the organizations with experience are supported," she added.

However, getting the message across is the main challenge for organizations trying to fight racism and right-wing crime, Uwe-Karsten Heye pointed out.

"It's not easy to convince a stubborn 14-year-old with strong neo-Nazi beliefs," he said. "And then wonder: how did this happen? This kid wasn’t born this way."

Actually, it is a challenge for any parent or adult to get such a message across to a 14-year-old. One organization that tries to fight right-wing crime is the Anne Frank Center in Berlin. It creates exhibitions which travel from town to town -- in an attempt to educate teenagers about the dangers of far-right groups. The Center trains teenagers from the communities in which the exhibitions are being shown to work as guides.

"The idea behind this concept is that teenagers are more interested in a subject if the teacher is also a teenager,” said Hans-Peter Gahleitner, an 18-year-old who works for the Anne Frank Center. 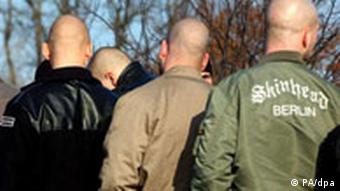 "Neo-Nazis appeal to the young because they have nothing else"

Gahleitner has a theory about why far-right crimes and support for neo-nazism are on the rise.

"There are sometimes opportunities offered only by these right-wing parties," he said. "There are no other possibilities and other initiatives for the young generation."

"We need a long-term strategy to win back these regions that we've lost," he said. "It's not that we can't muster up any support there because we're idiots. It’s because we're not represented well enough in these areas."

"We as democrats have no presence there," he added. 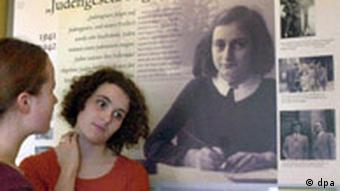 An exhibition on Anne Frank traveled through Germany a while ago

Others stress that the tendency to look away has increased. In addition, many people in the eastern states have tended not to even talk about neo-Nazism and related topics since the fall of the Berlin Wall. Often, the attitude is: it's better not to say anything at all, than to say something wrong."

Hard on the heels of Jewish complaints of rising right-wing extremist violence in Germany, neo-Nazis demonstrated in Berlin over the weekend in support of a skinhead rock band. (23.10.2006)

Germany's Far-Right Rolls Up Its Sleeves

The Federal Police Office (BKA) has revealed that the far-right threat is a very real one, with the number of violent offenses committed by neo-Nazis climbing steeply. (17.10.2006)

Politicians are scrambling to clarify why the far-right NPD won seats in Mecklenburg-Western Pomerania's state assembly last weekend. But explanations should be replaced by long-term deliberation, say analysts. (19.09.2006)