German Hopes for Security Council Seat Get Boost | Germany| News and in-depth reporting from Berlin and beyond | DW | 15.03.2008

Germany's ambassador to the United Nations Thomas Matussek says that momentum is growing to end the impasse that has long blocked the launch of formal negotiations on expanding the body's Security Council. 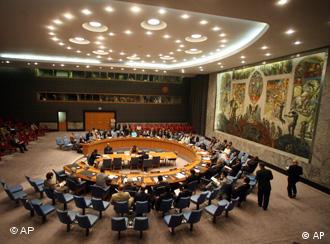 Germany doesn't want to be left out

The president of the UN General Assembly last year asked Thomas Matussek to lead a committee of UN member states to try again to break the deadlock on expansion of the Security Council -- known as the "over-arching process" -- and get formal negotiations underway.

Matussek told Reuters news agency in New York this week that after informal discussions with many of the 192 UN member states, the committee was now set to finalize a draft text that would hopefully form the basis for official intergovernmental negotiations.

"We feel very encouraged at the first meetings of the over-arching process because they have resulted in a drafting process and we hope to give a final product to the president of the UN General Assembly soon," he said.

As one of the main candidates for a permanent seat, Germany has a vested interest in the outcome. Others include Japan, India, Brazil and an undetermined African state.

Germany has long been arguing its right to a seat. The third largest contributor to the UN regular budgets, it has also become one of the largest contributors of troops. German soldiers are engaged in Afghanistan, Kosovo and Bosnia and joined peace missions to Cambodia, Somalia and the Persian Gulf. Moreover, German diplomacy plays a constructive role on the international stage.

But while Germany's bid is supported by Japan, India, Brazil, France, the United Kingdom and Russia, among other countries, Italy, for example, firmly opposes it.

Against the backdrop of such disagreement, diplomats said that even if negotiations on expanding the council get under way, there is no guarantee they will succeed.

The council is currently made up of five permanent members with veto rights -- Britain, China, France, Russia and the United States, considered the victors of World War Two -- while 10 non-permanent members are elected for two-year terms according to regions.

Reform is, however, long overdue. Critics say the composition of the 15-nation watchdog of international peace and security has become outdated and should adapt to the new world order.

Even if negotiations do succeed and the General Assembly agrees to expand the council within the year, experts say it would take up to three years for member states to ratify the plan. 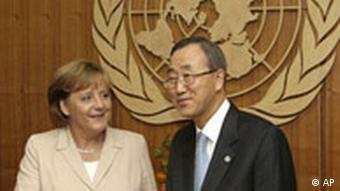 After German reunification in 1990, the government stepped up its efforts to secure a permanent seat on the Security Council.

The campaign gained unprecedented momentum under the previous government, with former Chancellor Gerhard Schroeder coordinating a push for inclusion with the governments of Japan, Brazil and India.

In September 2007, Chancellor Angela Merkel raised the issue once again when she spoke at the United Nations General Assembly.

"There is no other alternative than to adapt it to political reality," she said.

German Chancellor Angela Merkel used a speech before the United Nations General Assembly to bring up concerns about Iran and to push forward Germany's bid for a permanent seat on the Security Council. (26.09.2007)

The UN General Assembly Monday took the first step in calling on governments to reopen talks over the long-desired expansion and reform of the UN Security Council, on which Germany has wanted a seat for years. (18.09.2007)

Six Powers Discuss 'Next Steps in Security Council' for Iran

The six world powers meeting in Berlin discussed "the next steps in the Security Council," a senior European diplomat said in a clear allusion to possible sanctions against Iran over its nuclear program. (08.09.2006)

Do you think Germany has a right to a seat on the Security Council? Send us an e-mail, including your name and country of residence.