German hockey team skates from financial brink back to rink

When Kassel's professional ice hockey team went bankrupt last summer, many feared it would spell the end of the sport in the central German city. Instead, financial troubles actually proved to be the start of a revival. 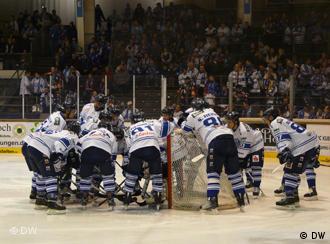 Husky fans have shown enormous support for the team

Professional hockey in Germany has always been a difficult proposition from a financial point of view and the economic downturn has hit the game hard, with teams in traditional hockey markets like Cologne and Dusseldorf having problems paying their bills.

In the summer of 2010, the situation came to a head in the German Elite League (DEL), the country's top hockey league, when financial difficulties forced two teams in the central state of Hesse, the Frankfurt Lions and the Kassel Huskies, to cease operation.

For Kassel, a city of 200,000 with a long hockey tradition, losing the Huskies was a particularly hard blow, and many people feared professional hockey was gone for good. But the European model of sports leagues offered an opportunity to start all over again.

Unlike in North America, where professional teams are fixed franchises with no promotion or relegation between leagues, the European model provides an opportunity for teams from the lowest competitive league to advance to the professional level by improving and winning promotion through the ranks over a period of years.

While the Kassel Huskies were gone for good, the Young Huskies, a junior team and youth hockey club remained. Completely unrelated to fate of the DEL team, the Young Huskies' board had decided earlier in the summer to enter a team in the lowest competitive men's league, the fifth division, or Hessenliga. 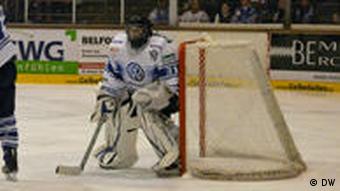 Kassel's goalies haven't had a lot of work this season

"The idea was to give our players a place to continue to play when they were too old to play junior hockey," Young Huskies chairman Marc C. Berghöfer said. "Suddenly, the youth team wound up being the lifeline which would really keep hockey going in Kassel."

When it was clear that the professional team would have to hang up its skates, efforts concentrated on preparing the EC Kassel Huskies, as they are now officially known, for play in the Hessenliga, where they would play in October 2010.

A blend of youth and experience

To support the youngsters, a few former stars from the club's days in the second division agreed to return to the ice to support the mostly junior players. Matthias Kolodziejczak, 48, became the team captain, and he, along with coach Milan Mokros, even convinced Shane Tarves, 56, whose retired No. 3 jersey hangs from the rafters in Kassel, to make a comeback after an absence of 17 years.

The blend of young and experienced talent proved to be the perfect recipe for the Hessenliga. With just a couple of games left in the season, the Huskies are undefeated and have all but clinched promotion to the fourth division for next season.

The Huskies' success on the ice came as no great surprise to people in Kassel or around the league. The real surprise was the level of support the team has enjoyed from fans. Even Berghöfer, their optimistic chairman, said he wasn't prepared for what happened at their first home game in the Hessenliga when over 5,000 fans came to the rink for the match against Diez-Limburg on October 9, 2010. 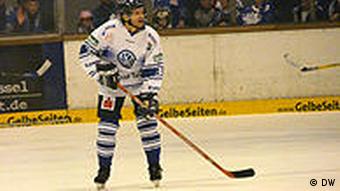 Both Tarves and his number three came out of retirement

"We were completely blown away, we thought that maybe 1,000 or 2,000 or, in the best case scenario, maybe even 3,000 would turn out for the first game, just to see the old stars back on the ice," Berghöfer said, adding that the game had to be delayed so everyone could find a seat. "But then we ran out of tickets, and we'd run out of beer by the second period."

With an average attendance of more than 4,500, the Huskies have been drawing around 1,200 more fans to their games in the Hessenliga than they did in the DEL last season.

What may seem like a strange development has a very simple explanation, according to Kassel-based freelance journalist Torsten Kolbe, who has followed hockey in the city for more than two decades.

"A ticket in the DEL costs about 30 euros ($42), so if you bring the family and have something to eat and drink you'll easily spend 100 euros," he said. "Now you can get a standing room ticket for 5 euros or a good seat for 10 euros. You can have a really nice outing for around what you used to spend on one ticket alone."

With promotion to the next league all but clinched, the club's board is starting to think about next season, which will bring tougher competition and increased costs. That's one step closer to the professional game, which begins in the second division in Germany.