German government decides to extend lifespan of nuclear plants | Germany | News and in-depth reporting from Berlin and beyond | DW | 05.09.2010

German Chancellor Angela Merkel's coalition government has decided to extend the lifespan of the country's nuclear power plants. Opposition parties and environmentalists are firmly against the changes. 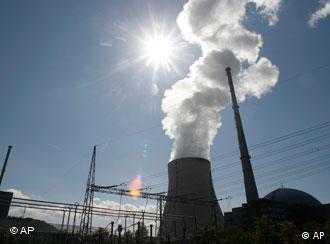 Germany's reactors were due to be closed down by 2021

Germany's coalition government has agreed to extend the lifetime of the country's nuclear power stations.

"There will be a staggered extension of the lifespans," press agency Reuters reported an unnamed government official as saying on Sunday evening.

The official said plants would fall into two separate groups, based on the year that they were built, to determine their closure dates. 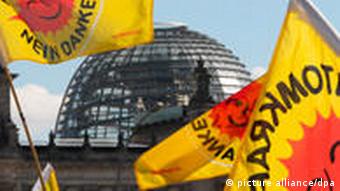 Protesters rallied against nuclear power outside the talks

According to the German news agency dpa, the planned changes would mean that newer reactors built after 1980 would stay open for 14 years longer than originally planned under the government of former chancellor Gerhard Schroeder.

Older plants would be kept open for an additional eight years. Environment Minister Norbert Roettgen and Economy Minister Rainer Bruederle confirmed later on Sunday evening that the extension had been agreed upon.

The coalition also agreed to an annual 2.3 billion euro ($3 billion) tax on energy suppliers who use nuclear fuel rods to generate power. However, the tax will be limited to a six-year period following objections from industry bosses.

The negotiations, which lasted 10 hours, came amid a long-running row about extending the lifespan of the country's nuclear power plants.

Hundreds of demonstrators rallied outside the chancellery where German Chancellor Angela Merkel was meeting with fellow coalition leaders Guido Westerwelle of the Free Democrats (FDP) and Horst Seehofer of Bavaria's Christian Social Union, along with other parliamentary leaders.

Demanding an end to nuclear power, some of the demonstrators carried banners saying, "Nuclear power: Only the risk is secured." 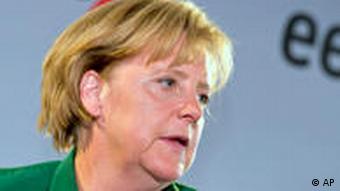 Sunday's meeting focused on granting the country's nuclear power plants an extra 10 to 15 years of production time and to decide on a levy for the utility companies' expected additional profits.

Schroeder's government decided in 2000 to shut down all nuclear plants by 2021. Merkel wants to extend that deadline by 10 or 15 years as a stop-gap measure until renewable energy sources are more developed. She has called the extension a "bridge."

A government-commissioned report last week said without nuclear power, Germany can forget its target of reducing CO2 emissions by 80 percent of 1990 levels in 2050.

The opposition and environmental groups have criticized the report as proof of Merkel's conservative Christian Democratic Party (CDU) caving in to the country's powerful nuclear lobby.

"The German government is reviving one of the biggest social conflicts in Germany for no reason," Sigmar Gabriel, head of the opposition Social Democratic Party (SPD) said on the sidelines of the anti-nuclear power demonstration in Berlin on Sunday. 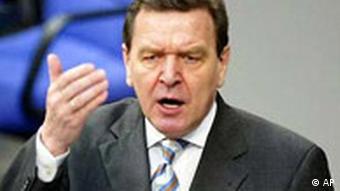 Current closure dates were agreed by the Schroeder government

Surveys show that most Germans favour an end to nuclear power generation. Germany has 17 active nuclear reactors, which account for 22.6 percent of the electricity generated in the country.

Roettgen, from the CDU, said last week he wanted to limit the extension to eight years. Bruederle, from the pro-business FDP, favored an extension of up to 20 years.

The center-right coalition no longer has a majority in the Bundesrat, Germany's upper house of parliament, so ratification of the proposals would be difficult. The coalition has hinted at the solution of bypassing the Bundesrat entirely, prompting anger from state governments which are represented in the house.

How do you ensure a steady supply of electricity from fickle renewable sources such as solar, wind and biomass? 'Smart grids' that manage and distribute flows of electricity could be the answer. (06.09.2010)

Berlin under pressure ahead of energy summit

Ahead of Sunday's energy summit in Berlin, German Chancellor Angela Merkel's support for extending the life of nuclear power plants has come up against strong resistance from green campaigners and the opposition. (04.09.2010)

With Berlin scheduled to unveil a new energy concept, power companies have been lobbying for the extended use of their nuclear plants, if only for 10 to 15 more years. They could recoup their investments and then some. (03.09.2010)