US finance firms poured almost half a billion dollars last year into lobbying the US government. The goal: Soften the blow of new financial rules. DW has learned that two German firms are among the big spenders. 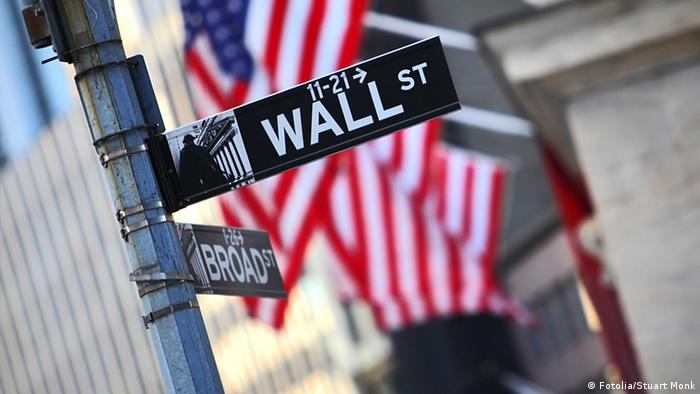 Wall Street Reform is a major issue for lobbyists

In the wake of the worst financial crisis since the 1930's and with tougher regulation looming with the passage of the Dodd-Frank act, (financial regulatory reform to improve transparency and accountability in the US financial system - the ed.) there is a lot at stake for finance companies doing business in the US.

That's why the finance industry, since the crisis began with the bursting of the US housing bubble in 2007, has not slashed, but increased its lobbying efforts despite the severe losses that almost killed many banks and insurers at the height of the meltdown in 2008 and 2009.

In the pre-crisis year 2006 the finance industry spent $378 million (304 million euros) on lobbying. Five years later banks, insurers and real estate companies paid out $477 million, an increase of 26 percent, according to the Center for Responsive Politics.

The list of financial institutions coughing up millions every year to lobby the US government reads like the 'Who is Who' of American banking. Goldman Sachs, Bank of America, JP Morgan, Citigroup - all the Wall Street heavyweights invest heavily and consistently in exerting influence on regulators and legislators.

But after analyzing hundreds of publicly available documents filed under US law, DW has learned that four German financial companies also invested heavily in lobbying the US government last year. The four - Deutsche Bank, Allianz, Munich Re and Deutsche Börse - combined spent at least $4.7 million in lobbying in 2011, records reviewed by DW show.

These lobbying expenses filed on official forms include money spent on direct lobbying as well as payments for trade groups and other organizations.

Deutsche Börse is somewhat of an outlier among the group, as the German exchange operator entered the lobbying arena in 2011 with the specific goal to boost its planned merger with the New York Stock Exchange. Deutsche Börse then spent $290,000 on lobbying Congress last year. It terminated its lobbying contract in the fourth quarter of 2011; on February 1, 2012 the merger was officially blocked by the EU commission.

Deutsche Börse didn't respond to a request for comment on its lobbying activities.

The remaining German trio is pursuing a different strategy. They favor consistent lobbying instead of the one-off lobbying activities engaged in by Deutsche Börse. Records show that since 2009 all three have kept up their lobbying activities while Deutsche Bank and Allianz have invested significant sums in lobbying since at least 2005.

Compared to the money both of them spent on lobbying the US government, Munich Re, the world's biggest reinsurer by premium income, is small fish. For the entire year 2011 the company spent at least $30,000 on lobbying Congress and the US Treasury mainly with regard to proposed changes in deductions that could affect foreign affiliates.

Munich Re spokeswoman Johanna Weber told DW that due to company policy she couldn't confirm these figures. She added that the US is the biggest and one of the most important insurance markets in the world in which Munich Re has been active for more than 100 years. "Of course we have been and are engaged in an intensive dialogue with regulators and political officials in the US to be well-prepared for changes of the legal framework," Weber noted via e-mail.

"Deutsche Bank has extensive business activities in the US and is subject to the rules and regulations there," Deutsche Bank spokesman Ronald Weichert told DW per e-mail. 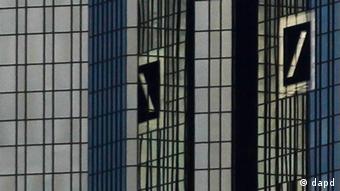 He added that the company retains an office with two employees and one assistant in Washington which inform Deutsche Bank about current legislation and possible effects of regulation. According to Weichert, the lobbying figures for 2011 paint a distorted picture since they also include relocation costs as well as expenses for rent and organizations. But according to filed documents with US authorities, Deutsche Bank in fact in 2010 spent even more, $3.4 million, on lobbying in the US.

Sabia Schwarzer, spokeswoman for the Allianz Group in the US, confirmed the firm's lobbying expenditures and told DW via e-mail that the lobbying costs "include not only our direct lobbying expenses but also lobbying expenses of the large number of trade associations to which our US affiliates belong." She added that the group's US affiliates have a responsibility to protect the needs and interests of their hundreds of thousands of customers. "It is our collective job to press our case and make known our position," said Schwarzer.

"It's absolutely a central part of what banks and financial institutions do here," James Thurber, a lobbying expert and director of the Center for Congressional and Presidential Studies at American University in Washington, told DW. "It's all internationalized in terms of trying to influence policies especially when it comes to banks."

Naturally, a key lobbying issue for most financial firms with business in the US, including Deutsche Bank and Allianz, is finance reform.

And that's exactly what Allianz spelled out in its official filings with authorities.

"Lobby for favorable implementation of H.R 4173, the Dodd-Frank Wall Street Reform and Consumer Protection Act regarding insurers," states Allianz in each of its quarterly lobbying reports for 2011 when asked about specific lobbying issues.

Allianz, according to the official documents filed and reviewed by DW, lobbies most key legislative and regulatory bodies with potential sway over finance reform namely Congress, the US Treasury, the Securities and Exchange Commission (SEC) and the Commodity Futures Trading Commission (CTFC).

Asked whether Allianz had succeeded in lobbying for favorable implementation of Dodd-Frank, spokeswoman Schwarzer noted that the implementation "is still very much a work in progress."

What's more, Allianz and Deutsche Bank both routinely made their views known directly to top US regulators.

Meetings with US regulators

Between September 2010 and September 2011, Allianz representatives participated in seven meetings with the CTFC, FDIC, the US Treasury and the Federal Reserve, according to logs compiled by the Sunlight Foundation.

Deutsche Bank participated in 47 meetings with the US Treasury, Federal Reserve, and CTFC between August 2010 and April of this year, according to the logs which are published regularly by US financial authorities since the passage of the Dodd-Frank law. 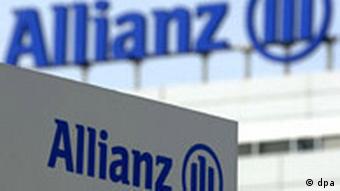 Allianz has important business interests in the US

Allianz and its subsidiary Pimco, the world's largest bond fund manager, on September 13, 2010 held a meeting with CTFC Commissioner Michael Dunn on exempt and agricultural commodity derivatives. On December 16, Allianz participated in a meeting with Assistant Secretary of the Treasury for Financial Markets Mary Miller to talk about the Volcker Rule (a ban on commercial banks to engage in speculative and proprietary trading named after Kurt Volcker, the former US Federal Reserve Chairman - the ed). And on February 2, 2011, Allianz and Pimco discussed possible CTFC rules on position limits in commodity spot markets with FDIC Chairwoman Sheila Bair.

According to Allianz spokeswoman Schwarzer, "Allianz had discussions with these regulators about a broad variety of issues that were important to the asset management industry and which have been pursued by other companies and our trade associations."

With a lobbying prowess that appears to be on par with American firms and strong business interests in the US, do Deutsche Bank and Allianz now have the same interests and influence as US companies?

Not quite, says Simon Johnson, the former IMF chief economist, now a professor at the Massachusetts Institute of Technology in Boston.

Most American financial firms have a huge interest in the so-called too-big-too-fail rules and in receiving potential government bailouts, notes Johnson. International players like Deutsche Bank and Allianz aren't focused on that, since they couldn't be bailed out by US taxpayers.

But aside from that, the interests of US and foreign firms "are very much in sync in terms of resisting meaningful financial reform," Johnson told DW. "They (the foreign firms) are not seen on the American political scene as generally powerful, but they can certainly get what they want when they focus on particular issues," he argues.

"And Deutsche Bank in particular had been given some extraordinary and hard to believe advantages," says Johnson. "Deutsche Bank was allowed to change the treatment one of its US subsidiaries, Taunus Corporation, in a way that is very favorable to them."

"They wanted to have very little capital in the operation to keep it as a highly leveraged and highly risky business and they were allowed to do that," notes Johnson. "So that was quite an extraordinary break or advantage that they got."

As reported by the Wall Street Journal in March, Deutsche Bank in February changed the legal structure of Taunus Corporation, so it is no longer a bank holding company.

Although virtually unknown to the public, Taunus is one of the largest US banking companies with $354 billion of assets and 8,652 employees at the end of 2011, according to the Journal. Under the Dodd-Frank law, Deutsche Bank would have been required to pump as much as $20 billion into Taunus Corporation which for years operated with thin capital cushions, wrote the paper.

Deutsche Bank spokesman Weichert told DW that there were no lobbying activities in connection with Taunus Corporation.

While it remains difficult to quantify the exact return on investment companies like Deutsche Bank, Allianz or Goldman Sachs receive for consistently spending millions on lobbying, common sense would say that it must buy them something. 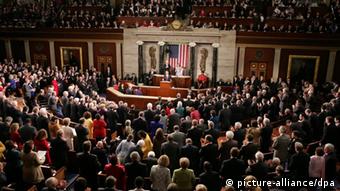 The US Congress is a key target for lobbyists

In what is probably the first study to measure the effect of financial lobbying, research by two IMF economists shows "that one thing that they (companies investing in lobbying - the ed.) are getting out of it is influence on the bills, on financial regulation rules," says Deniz Igan, one its authors who notes that she is not speaking on behalf of the IMF.

According to the yet unpublished study, lobbying by a financial firm on a specific bill increases the likelihood of a legislator shifting her position in favor of an industry-friendly bill by 37 percent. "So if they didn't spend that money they are looking at almost 40 percent more likelihood that the rules wouldn't be in their favor," says Igan.

The financial industry has apparently concluded the same thing even without knowledge of the study. In 2012 so far banks, insurers and real estate firms combined have already spent $121 million on lobbying, records show.

The two German lobbying heavyweights kept up their game as well. Deutsche Bank invested $430,000 in lobbying in the first quarter of 2012 while Allianz spent $580,000.

DW has learned that Deutsche Bahn, Germany’s national railway, has hired two US firms to lobby on Holocaust legislation. The reason: Two bills before Congress would allow Holocaust victims to file suits in the US. (30.03.2012)

The government in Berlin seeks to tighten control of so-called algorithmic trading earlier than planned by the European Commission, media reports have said. The aim is to prevent 'flash crashes' of stock markets. (29.05.2012)