German Foundations Acquitted in Turkey Espionage Case | News and current affairs from Germany and around the world | DW | 04.03.2003

Members of the four German foundations accused of espionage in Turkey have been acquitted by a court in Ankara. 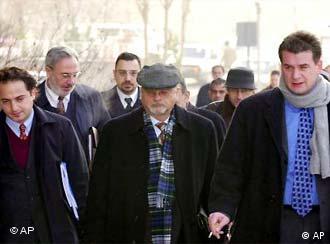 Acquitted of espionage charges, the German foundation representatives are free to return home.

A Turkish court has acquitted the members of four German political foundations and a group of local environmentalists who had been accused of spying in Turkey.

The state security court rejected charges that the 15 defendants -- nine Germans and six Turks -- had formed a "secret alliance" with local groups to undermine and spy on the Turkish state.

The Germans, working for four organizations -- the Friedrich Ebert Stiftung, the Friedrich Naumann Stiftung, the Heinrich Böll Stiftung and the Konrad Adenauer Stiftung -- had been charged with promoting separatist tendencies in Turkey and supporting a group of environmentalists from the village of Bergama in western Anatolia. The Germans were also accused of working with the environmentalists to prevent the extraction of gold from a mine in the province.

The environmentalists have long protested against the use of cyanide in gold mines in their region and have caused embarrassing disruptions in the Turkish capital. Their activities and the alleged partnership with other organizations led prosecutors to charge the Germans with supporting "state enemies" and "conspiring against the security of Turkey." The defendents were each facing jail sentences of up to 15 years.

The trial began in December 2002 when the defendants were officially charged in Ankara. The Turkish prosecutors have since been making their case, claiming that the nine foundation members and the six accused Bergama environmentalists are guilty of "spying and working to undermine the Turkish State."

It is believed that investigations began into the role of the foundations -- which seek to promote civil society and bilateral cooperation -- after claims of espionage and coercion surfaced in "The German Foundations and the Bergama Affair," a book by the self-appointed intelligence agencies expert and Turkish scientist Necip Hablemitoglu. 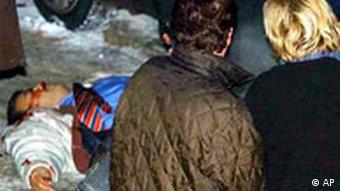 Necip Hablemitoglu was killed shortly after the case began.

In his book, Hablemitoglu accused German foundations in Ankara of spying and having close contacts with ecological, Kurdish or fundamentalist Islamic groups. He described the German foundations as "centers of agitation against Turkey" and said that the foundations were supporting the protests against the use of cyanide "to the advantage of Germany." Hablemitoglu has not been able to support his claims in court as he was assassinated in front of his house in Ankara a week before the case was first heard.

Those who have taken part in the prosecution's case have been equally damning. The former public prosecutor Nuh Mete Yüksel, who withdrew from the prosecution due to a scandal, said in his indictment in December, "The foundations are the most effective and dependable crutches of German foreign policy. When one observes their activities in Ankara closely, it’s clear that there are grave signs that this is a case of espionage."

Yüksel said at the beginning of the trail that the foundations acted against the country's national interests and forged close ties with ethnic and religious groups with the aim of breaking up Turkey, actions he called "legal espionage." He added that they were charged with "creating a secret alliance against Turkey's unity and the secular republic's regime."

The German government and the foundations had both maintained the innocence of those involved. The German ambassador to Turkey, Rudolf Schmidt, said the accusations against the foundation members were "baseless, unfounded and even absurd." 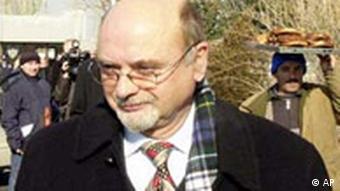 Wulf Schönbohm of the Konrad Adenauer Foundation in Turkey

A court in Turkey is hearing an espionage case against representatives of several German foundations. Observers suspect a battle within the Turkish establishment over rapprochement with the EU is behind the affair. (27/12/02)