From Ukraine via Iran to the crisis in Syria, German foreign policy has played a central mediating role on a striking number of occasions in 2015. It seems the Germans have found their place in international affairs. 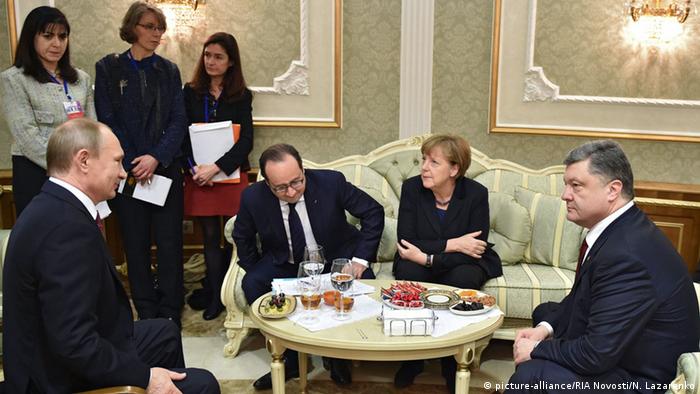 The negotiations in the Belarusian city of Minsk lasted all night - a total of nearly 17 hours. Finally an agreement was met, although it is one which almost everyone involved remains unhappy about. But at the time, all the signs in eastern Ukraine pointed towards war between Kyiv and the Russia-supported separatists. In Minsk the German chancellor and the French president managed to extract a plan from the Russian and Ukrainian presidents which for the first time hinted at the possibility of a solution.

The implementation of the Minsk agreement remains sketchy, the armistice fragile. But the foreign ministers of the four countries - Ukraine, Russia, Germany and France - meet regularly to discuss the next small steps to be taken.

While all this has been going on, the Germans have managed to tighten and uphold EU sanctions against Russia - contrary to the interests of some European countries and parts of the German economy. 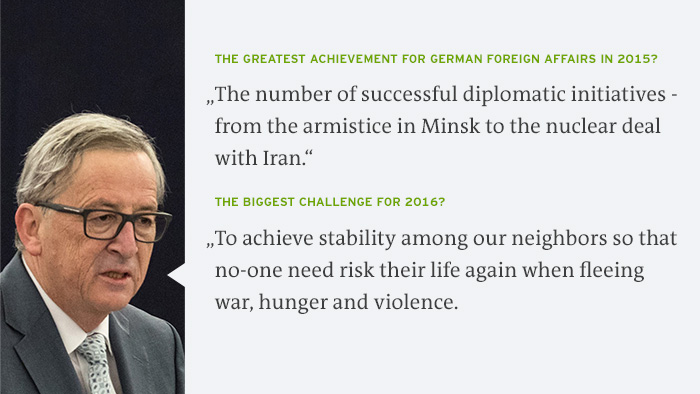 The night of negotiations on July 13 demonstrated once more one of the particular qualities of German foreign policy - stamina. Yet again Angela Merkel negotiated for 17 hours. The third bailout package was put together for Greece. The Greek leftist government under Alexis Tsipras, which was elected in January, had spent months trying to break free of the prevailing EU rescue logic with its strict requirements for reform. Tsipras' method of choice: Division. He set the Germans up as the baddies and sought allies among the other south European states.

And that revealed a further quality of German foreign policy: an ability to integrate. In Athens, Angela Merkel and Francois Hollande, the conservative chancellor and the socialist head of state, demonstrated European unity. The prevailing feelings after the July agreements were exhaustion and relief - not enthusiasm. The Greek drama is a series, with the next season already well underway. 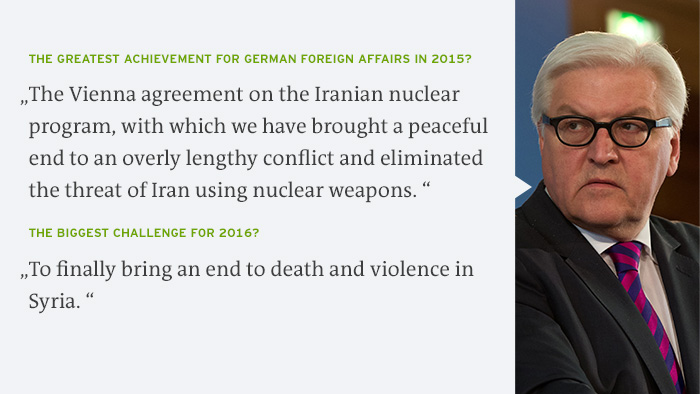 End of a crisis: Iran in July

A dozen years of negotiations with a final stretch lasting 14 days - in which the negotiators kept shifting their own deadlines - and, once again, hours of tough debate.

And then, in Vienna on July 14, it was done - the nuclear deal with Iran. No other country has been subject to such tight surveillance. For the next 25 years all of Iran's nuclear activities are to be audited, and enrichment and development tightly restricted. In return, the West has suspended its economic sanctions, with the right to immediately reinstate them should Iran violate agreements.

Germany played its central role as a mediator - Iran has great trust in Germany despite the latter's steadfast support for Israel. That, together with the willingness to accept disadvantages to its own economy through years of sanctions, has strengthened the trust of the other side, the five veto powers in the UN Security Council. As a mediator, Foreign Minister Frank-Walter Steinmeier brought all the experience he gained during his first term in that post (between 2005 and 2009). Ten years of talks - with intermissions - was rewarded with a historic treaty. 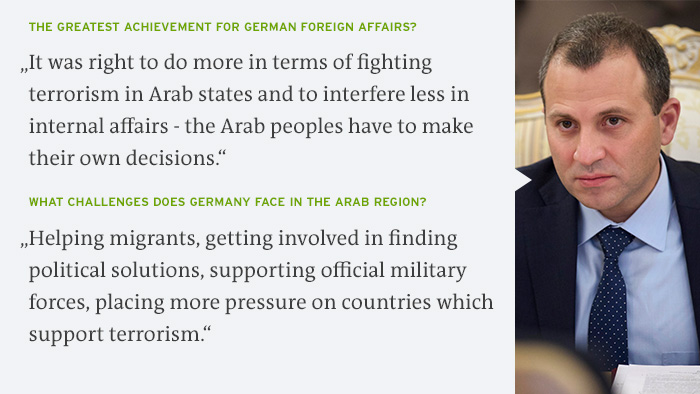 The great crisis: Syria and the refugees in late summer

After raging for more than four years, the civil war in Syria has finally caught up with Europe and with Germany in particular. Millions of Syrians have already fled the terror of the Assad regime and the "Islamic State," with the majority heading to neighboring countries. There the global community has fallen increasingly short in efforts to care for them, with the UN forced to reduce rations. In the summer, those fleeing headed north and, once it opened its borders to war refugees, Germany became the "promised land."

Most other European countries were unimpressed by Germany's decision. But under pressure from the sheer numbers of refugees and increasing concern that the terror of "Islamic State" could spread, all the key players met in Vienna on October 30 to discuss a political plan for Syria - including the regional powers of Saudi Arabia and Iran. They are sworn enemies but two weeks prior to the Viennese talks the German foreign minister traveled to both countries for political talks and managed to convince them to come to Vienna.

At the same time the airspace became crowded above Syria. Since the terror attacks in Paris on November 13, French and British fighters have been carrying out air raids on "IS" in Syria supported by German reconnaissance planes and tanker aircraft. 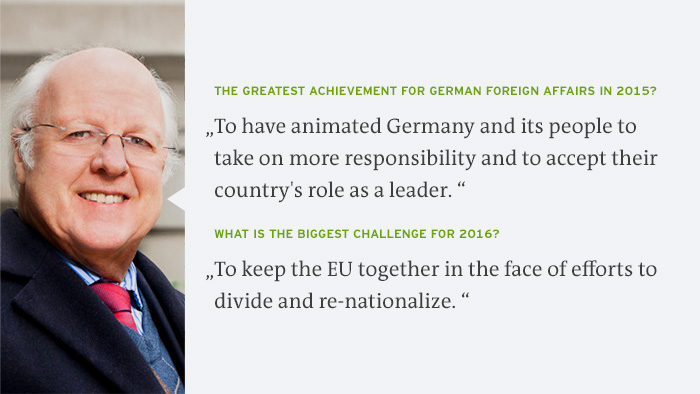 Europe is not in good shape. Its solidarity is crumbling. Germany is surrounded by countries in which the majority of voters are marching to the beat of re-nationalization and separation. According to opinion polls, Britain looks likely to head out of the EU. The German foreign ministry is battling hard to avoid a "Brexit." This year alone, the chancellor has met face-to-face four times with the British prime minister, not to mention their extra talks on the edges of summit meetings.

The transatlantic relationship continues to drift apart, most visibly in dealings with China. Whilst the Germans look towards China with an eye to trading policies, the USA's perspective is more military and confrontational in character.

In Africa, both the eternal potentates and the corruption threaten to strangle the continent's future chances - and not only in Burundi. Germany's foreign minister travelled to Sub-Saharan Africa eight times in 2015. In fact, Frank-Walter Steinmeier visited a total of 65 countries this year, not counting his trips to Brussels, Geneva and Vienna. What is the strategy behind all this? There isn't one great foreign policy strategy. Unless the constant effort to mediate and not give up counts as one.

German FM Frank-Walter Steinmeier has expressed concerns about ceasefire violations in eastern Ukraine. The number of incidents of violence has increased during the Christmas holidays. (29.12.2015)

The UN has named January 25 as the day for representatives of the Syrian regime and opposition to begin international talks aimed to end the war. Questions over the fate of Assad and rebel groups to be invited remain. (26.12.2015)

No sooner had the conflict in eastern Ukraine frozen than Russia began its military deployment to Syria. Moscow's return to the world stage presents new opportunities, but also new dangers. (24.12.2015)

The problem of Syria's civil war came up frequently on German Foreign Minister Frank-Walter Steinmeier's recent trip to Saudi Arabia and Iran. Solutions to it did not. DW's Dagmar Engel traveled with the minister. (20.10.2015)

Angela Merkel has been named Time magazine's '2015 Person of the Year.' The magazine's editors are full of praise for the German chancellor's policies. Felix Steiner views them more critically. (09.12.2015)