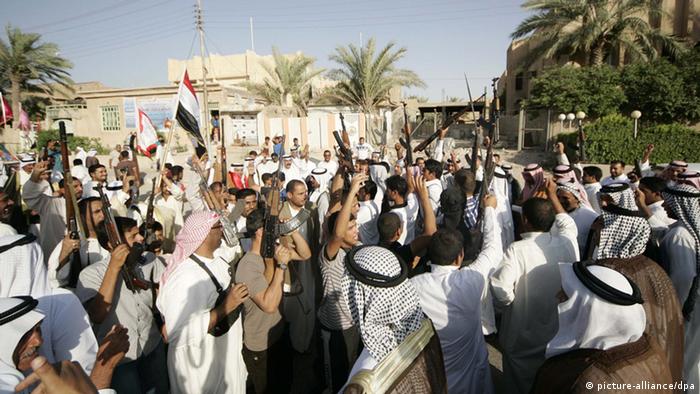 Foreign Minister Steinmeier told the Sunday edition of Die Welt newspaper that the international community "must prevent the outbreak of a proxy war between the regional powers on Iraqi soil."

The Islamic State of Iraq and Syria (ISIS) has made rapid military advances in Iraq over the past week, further escalating tensions in a region already deeply divided over the civil war in neighboring Syria. The Sunni extremist group, which broke off from al Qaeda, operates in both countries.

Leaders in Baghdad are on edge as ISIS insurgents near the Iraqi capital. Fearing an outbreak of sectarian violence, house raids and checkpoints on the street have increased across the city. (14.06.2014)

"All [Iraq's] neighbors - Saudi Arabia, the Gulf states, Turkey and Iran - cannot have an interest in a huge, lawless area developing beyond Syria in their immediate neighborhood, which becomes a stomping ground for mercenary groups, Islamists of every color and terrorists," Steinmeier said.

Berlin's top diplomat ruled out the deployment of German troops, calling on the major Mideast powers to take responsibility for stabilizing the situation in Iraq.

On Sunday, the Iraqi military pressed on with a counteroffensive against ISIS, reportedly retaking two towns north of Baghdad. Kurdish forces claim to have seized the border crossing with Syria at Rabia after regular army units had abandoned their posts. Two Kurdish fighters died in clashes with militants there.

A recruitment center for volunteer fighters was shelled in the central Iraqi town of Khales, killing six people, including three soldiers. In the eastern city of Khanaqin, an Iraqi airstrike struck a Kurdish convoy, killing six fighters. It's not clear whether that strike was an accident or intentional.

Former UN envoy to Syria Lakhdar Brahimi blamed the international community for the crisis in Iraq. He said that the major powers "unfortunately neglected the Syrian problem and did not help to resolve it."

"It's a well-known rule: A conflict of this kind [in Syria] cannot stay confined within the borders of one country," Brahimi told the AFP news agency.

"The jihadists' action in Iraq is taking place against a backdrop of a civil war between Shiites and Sunnis," the former UN envoy said.

As a consequence, Iraq's minority Sunni community is likely to "support the jihadists not because they are jihadists, but because my enemy's enemy is my friend."

Meanwhile, the Syrian government on Sunday recaptured the town of Kassab, the only border crossing with Turkey in the northern province of Latakia.