German floods: Where did fake news about 600 dead babies come from?

Rumors that the bodies of 600 children have been found in Germany's flood disaster areas are rife on social media and other online platforms. DW looked into the story to find the origin of the false reports. 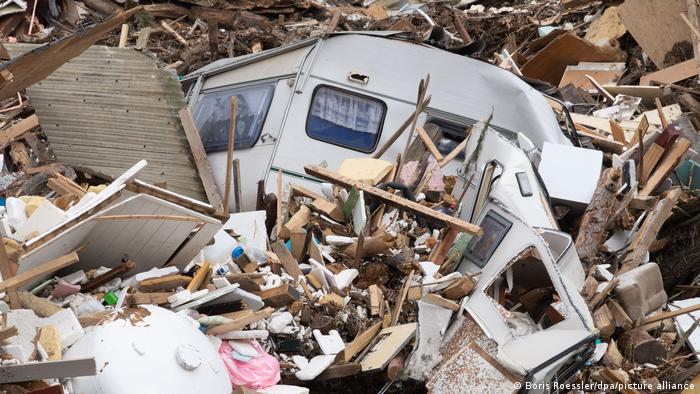 The flooding left behind a trail of destruction

First of all, it's important to point out that the Koblenz police has denied any and all reports that 600 bodies of children were found in the flooded areas of the Ahr Valley after the disastrous flash floods in mid-July.

In a written statement to DW, a spokesperson said that "rumors that a large number of bodies were found are circulating, but they have not been confirmed in any of the named places and it has not been brought to our attention that any large numbers of bodies have been found." In addition, police have warned the public against "unthinkingly" spreading the rumors online.

According to the latest police figures, the number of casualties from the floods in the state of Rhineland-Palatinate lies at 134, with 59 people still missing. At least 47 people died in neighboring North Rhine-Westphalia, and another 41 were killed in Belgium.

Where did these rumors come from?

As far as DW has been able to confirm, one news report — taken out of context — seems to have played a decisive role in triggering the rumors. A short excerpt from a report broadcast as part of a morning news program by the German television channel n-tv appears to have been turned into a 15-second video clip, which subsequently went viral.

The clip shows a German reporter standing in front of a mountain of rubble and talking about the situation on the ground. He can be heard saying the following words before the video stops: "… still live. On the one hand, of course, they have had a traumatic experience. We were able to talk with residents who found the bodies of children in their homes, washed up from somewhere further away. And on the other hand, the question is, will there be more flooding? They say …" This is where the clip ends.

DW asked n-tv for more information and a spokesperson for the media group RTL Deutschland, to which the channel belongs, confirmed that the video was "a much-shortened extract" of a conversation shown on the 9 a.m. morning news program on July 22. The reporter was in Altenburg near Altenahr, which was especially hard hit by the floods.

This screenshot of a Facebook post shows that the video began spreading online soon afterwards, at 10:55 a.m. that same day. At this point, however, there was no talk of 600 bodies. This excerpt is thought to have triggered the rumor

But the first posts already indicated a more or less clear link to conspiracy theories such as those being spread by the far-right QAnon movement, which got its start in the US. According to those who follow QAnon, a global elite is conducting secret and deadly experiments on children who are being held in underground bunkers or tunnels. For those who promote this conspiracy theory, the floods would have brought the bodies to the surface.

It's difficult to determine, however, where the number 600 came from. There was no mention of this figure in the entire report, which DW was able to view. 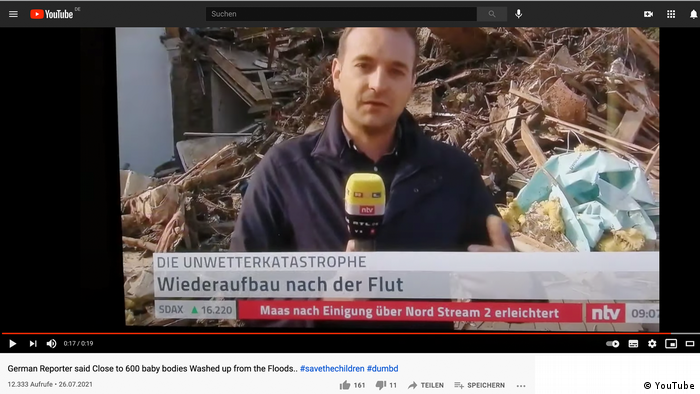 The video clip soon spread around the world, and on July 26 it appeared on YouTube with an English title. The description implied that the German reporter had said that the bodies of 600 babies had been washed up by the floods. Some viewers posted the correct translation of the reporter's words, but were frequently dismissed or simply ignored.

DW also found similar examples in Japanese, Dutch and Spanish on social media and other online platforms. One tweet implied that the reporter had been deliberately interrupted. 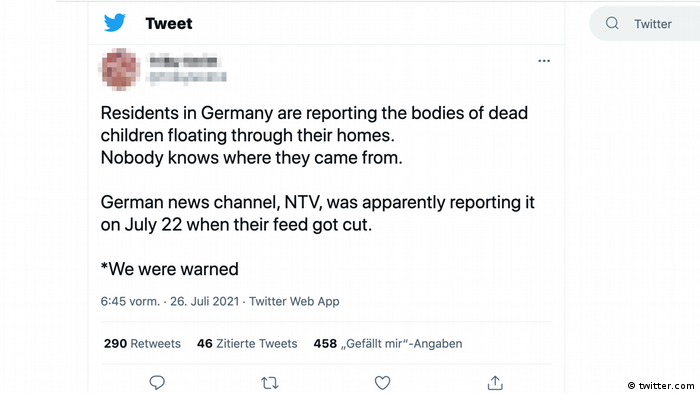 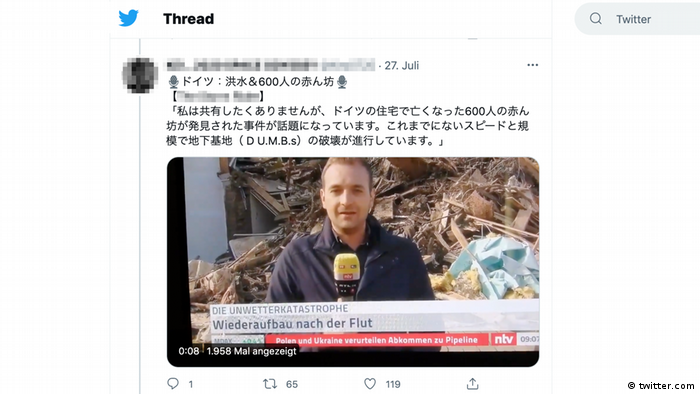 Andre Wolf, a communications expert who works at the Austrian fact-checking site Mimikama that campaigns against online abuse, has also explored the origin of this false report. He found a plausible connection to the QAnon movement, and told DW that the fact that there was no evidence for the claim was typical for conspiracy theories, which often followed a simple pattern: "So long as there is no evidence to the contrary, what we say is right."

Wolf said that if those people spreading the fake news wanted to be believed, they would have at least tried to provide some sort of evidence after the police released their statements.But he said that this is where their self-protection mechanisms came into play; those who spread such rumors also believe that "the whole story is being kept secret from the public and those refuting it are part of the conspiracy." The fact that the authorities put out such statements are then seen as evidence that their beliefs are correct, because "the authorities would do anything to cover it up."

Babies and children are recurring themes in conspiracy theories, as they provide a simple way to dehumanize enemies such as elites or the government. "The worst thing that these enemies can be accused of is torturing or killing children," Wolf said, explaining that this allegation triggered a protective mechanism, a sort of primal instinct, among believers. "People tend to share these messages, get caught up in them and get angry," he said, adding that they then become less inhibited and more prone to attacking their enemies, such as the state. "The idea is to radicalize people."

But children's bodies were found, weren't they?

The fact is, rescue teams did find bodies among the rubble, and n-tv did talk about the bodies of children being found in two cases, once in an interview with a police officer in Altenahr and once in the above-mentioned report.

In response to DW's question about what sources the TV reporter had used, n-tv stated: "Some individuals told us about children who had died. One was [...] an Altenburg resident, who described her experiences during the night of the flood to our reporter and whose descriptions were included in the report." 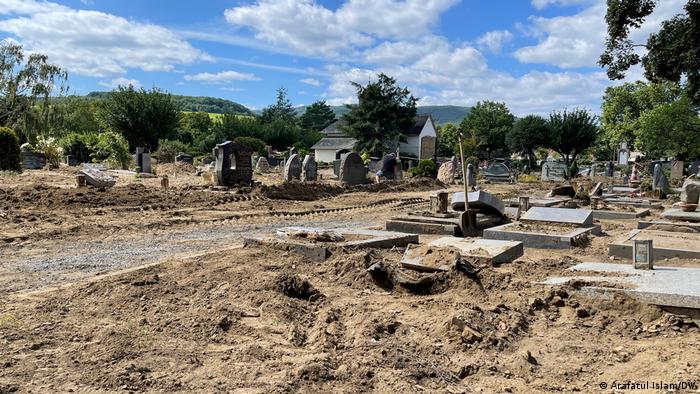 Though some bodies have been found in the aftermath, police say there have been no reports of hundreds being found at once

When approached by DW, the Koblenz police said it would not comment on whether any corpses of babies or children had been found, pointing out that it was a sensitive issue. "Please understand that out of respect, we cannot provide any information on exact locations where the deceased were found, or other personal data. It could otherwise be possible to draw conclusions about the identity of the deceased in small towns," they said.

In conclusion: the reports of a large number of dead children being found in the German flood zones lack any basis in fact.

Editor's note: In an effort not to further promote the false reports, DW has deliberately chosen not to link to the original posts on the social networks. Instead, we have shown anonymized screenshots.

This article has been translated from German.
A previous version of this story incorrectly identified Andre Wolf as founder of Mimikama. That has been corrected.

At first, it seemed like nothing more than a harmless daylong rain — but it never stopped, it just kept pouring. DW's Christoph Hasselbach, who lives in Germany's worst-hit region, reports.