German Finance Minister Blames US for Financial Crisis | Germany | News and in-depth reporting from Berlin and beyond | DW | 25.09.2008

German Finance Minister Peer Steinbrueck deemed the US banking crisis an "earthquake" that will cost the US its role as a superpower of the world financial system. He stressed that German banks can cope with losses. 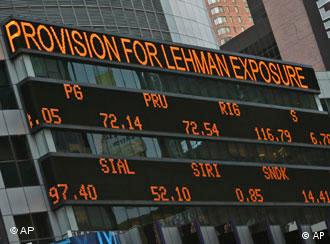 Wall Street will never be the same again, said Steinbrueck

"Wall Street and the world will never again be the way they were before the crisis," said Steinbrueck in a speech to the German parliament, the Bundestag, on Thursday, Sept. 25. Write-downs and write-offs of bad credit spawned by "a blind drive for double-digit profits" have so far totaled $550 billion and no end to the crisis is in sight, he added.

Steinbrueck told the Bundestag that the Group of Seven (G7) finance ministers would be meeting in Washington next month to discuss how to tighten regulation of capital markets.

The German federal government, meanwhile, would continue efforts to trim spending, but would also make some moves to stimulate the economy.

He reiterated Germany's refusal to set up its own bank bail-out scheme, saying the crisis was principally a US problem. 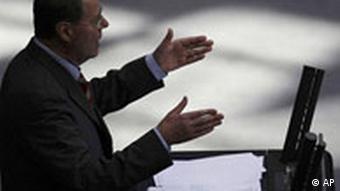 Steinbrueck didn't pull his punches during the Bundestag speech

Reiterating Berlin's push for tighter regulation, Steinbrueck accused the US of blunders.

"The cause of the crisis was the irresponsible exaggeration of the principle of a free, unrestrained market," he told the Bundestag.

Washington has been reluctant to increase minimum equity rules and has too many competing regulators over US investment banks.

"This system, which in many ways is inadequately regulated, is now collapsing," he said, adding that Germany's banking system remained "relatively robust," with German regulators confident they can absorb losses.

"New rules of the road" for the financial markets were needed, he said.

Plans to be debated when the finance ministers of the G7 meet will include tightening cooperation between the International Monetary Fund (IMF) and the Financial Stability Forum (FSF).

The agencies were created by western nations as an early warning system. 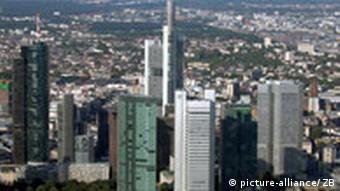 The German Landesbanken need to pull together

Steinbrueck also renewed his call for fusion across Germany's state bank sector. The country's big commercial lenders, the so-called "Landesbanken," have been hard hit by the financial crisis.

The next move needs to be made by the individual states, as co-owners of the leading state banks, said the Social Democrat minister: "They need to overcome regional political pride and embrace pan-regional co-operation."

This, he said, would strengthen the German banking system and boost its sustainability.

"Financial support from the government in mopping up problems in this sector should not be expected," he added.

Given that past attempts to fuse the "Landesbanken" have failed, Steinbrueck proposed a redefinition of their business models in order to avoid excessive risk and to increase returns.

The financial crisis has, however, shown that both savings banks and cooperative banking institutions are stable and reliable, said Steinbrueck.

Sub-prime mortgages are virtually unknown in Germany since home ownership rates are relatively low. Germans tend to be debt-averse and are required to put down more equity in financing a home purchase. (25.09.2008)

The EU says its financial system is robust and there is no need to come up with a US-style bailout as Federal Reserve Chairman Bernanke offered his bleakest outlook since a credit crisis set in last year. (24.09.2008)