New orders in the German industrial sector dropped significantly in June due to mounting global tensions and sluggish demand from the eurozone. They contracted at their fastest rate in three years. 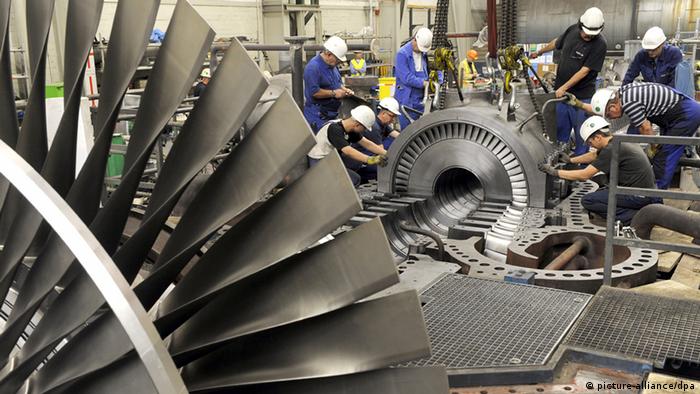 German industrial orders fell for the second consecutive month in June at a rate of 3.2 percent, following a similar 1.6 percent contraction in May, the economics ministry in Berlin said Wednesday.

According to the data, orders contracted at their fastest pace since September 2011, disappointing analysts who had predicted gains of 0.9 percent in a consensus forecast.

"The geopolitical developments and risks above all led to certain reluctance in placing orders," the ministry said in a statement.

In the coming months, industrial activity was expected to develop moderately, the ministry added.

Global tensions triggered by the crisis in the Middle East and tougher sanctions imposed on Russia over the Ukraine conflict were expected to take their toll on German exports and growth.

In June, German order books were also dragged down by dwindling demand from the 18-nation eurozone, where orders declined by a staggering 10.4 percent.

In addition, orders from businesses outside the euro currency area dropped by 4.1 percent, while domestic demand decreased by 1.9 percent in June.

The economics ministry noted that "bulk orders" in particular were well below average. Excluding big ticket items, total new factory orders would have risen by 1.1 per cent in June, it added.

Leading the decline were German capital goods such as plant, machinery and equipment, down 6.4 percent, with orders from the eurozone plummeting by 19.5 percent.

Sluggish factory demand is likely to hit economic growth in Europe's biggest economy in the second quarter, following a strong expansion of 0.8 percent in the first three months of the year.

The German central bank, the Bundesbank, predicted gross domestic product (GDP) would stagnate in the three months ending June. Industry especially had shifted into "a low gear," it said in its monthly report released last month.