In 2011, over a trillion euro's worth of German goods were sold abroad. Deutsche Welle spoke to the head of the Federation of German Wholesale, Foreign Trade and Services to find out whether next year will be as good. 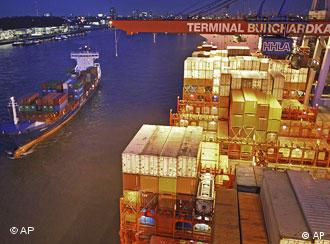 2011 was a record year for German industry

It's a record with symbolic value: for the first time in history, German exports have cracked the magic barrier of 1 trillion euros.

Even in the boom year of 2008, exports didn't reach this year's highs of 1.07 trillion euros ($1.43 billion). In return, some 919 billion euros of goods were imported into the country. That may be more than in recent years, but the bottom line is an export surplus of some 156 billion euros. Foreign countries regularly criticize this excess.

Many say Germany won its advantage at the cost of its European neighbors. Anton Börner is president of the BGA, the Federation of German Wholesale, Foreign Trade and Services, a leading organization for the sector in Germany. He thinks such reproaches are ridiculous.

"Such surpluses were never and are not a German policy aim," Börner told Deutsche Welle. He added it was important to make European partners understand this was not a "German" way of doing things. "Market laws apply in all countries and were not made up by Germany."

Germany to remain strong in exports

Börner predicts that in the coming year there will be a similar surplus in Germany's trade balance. Despite the weakening of the global economy, he expects exports to rise by 6 percent to 1.14 billion euros in Europe's biggest economy; imports, meanwhile, are set to grow by 7 percent to 983 billion euros. 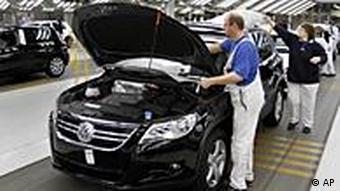 Börner says the atmosphere in medium-sized companies in Germany is cautiously optimistic, and that applies particularly to the capital goods market.

"We estimate that the emerging markets will be hardly affected by the debt crisis and that they will continue to invest in future technologies," he said. He adds that the major global trends remained intact: developing countries find themselves in a race with their exploding population development.

Those emerging markets are making massive investments indispensible in everything from energy efficient technologies to road-building, construction and telecommunication infrastructure. And that affects not only the BRIC states (Brazil, Russia, India and China), but also what are known as second-rung growth markets, like Indonesia, Bangladesh, Saudi Arabia and Kuwait, as well as the states in west Africa which are rich in natural resources, plus Peru and Ecuador in South America.

It's the European Union countries which remain the most important trading partners for German businesses. Around 60 percent of German exports are sold to neighboring European countries.

It's therefore no surprise that the current eurozone debt crisis is of major concern to the Federation of German Wholesale, Foreign Trade and Services. If European state finances get out of control, then most of the economic predictions for the coming year would be rendered worthless, Börner warns.

"However, the fact that we profit hugely from the euro does not mean that we should let ourselves into any political horse-trading simply to save the single currency," he said.

Germany should not give way to the growing pressure to consolidate the liability for debts, he believes. Instead, budget consolidation is the order of the day.

"What we need, and here I strongly support the chancellor's policy, are clear political messages," said Börner. That applies to the German position on Italy, as well as on France and on the European Commission.

"Especially regarding Italy, I say it loud and clear: stay firm, Frau Merkel! Italy is now on board and has to deliver," he said. 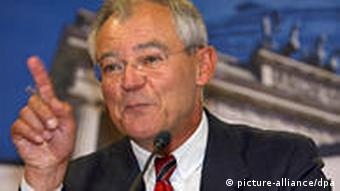 The Italian government is barking up the wrong tree if it thinks it can improve its competitive ability without harsh reforms, Börner argues. The Italians have to make a push to open up and move away from thinking about vested rights. If the Italians are not prepared to do that, Börner believes it would be better for the country to leave the single currency, before the financial markets force Italy from the eurozone.

That's what Börner has already recommended for Greece and Portugal. A partial default alone would not solve the problem of competitiveness for either of these countries, he says.

"If Greece were to leave the eurozone voluntarily and were to devalue its currency by 40 to 50 percent, it would fall to price levels of Turkey overnight." Therefore, according to Börner, the country would become competitive in many sectors of its economy and it could start again from scratch and generate income. That, he says, is how Greece can escape from the current debt trap.

The BGA president believes the crux to overcoming to European debt crisis remains the partnership between Germany and France. Both countries, he argues, should pull together in all circumstances and work in parallel.

If France were to step out of line with the eurozone and with Germany, the Germans would have to pay a high economic price and above all, a high political price. Germany would be isolated in Europe for the next 10 to 15 years. The country would bitterly regret such a situation, because it would cost much more money than demanded by the current stabilization of the eurozone.

Germany serves as example of a sustainable economy

The world's seventh billion person was born recently and population is set to continue growing. A conference in Bonn addresses how a sustainable economy could help the growing world will cope with limited resources. (16.11.2011)

After Greece and Italy, more EU countries are feeling the heat as fresh funds demand higher interest rates. But the German government does not believe the ECB alone can halt the downward spiral. (17.11.2011)