It's a leftover relic from a time when two powerful nations raced one another into the stratosphere: a nuclear powered Soviet satellite. It’s breaking up in space, though experts are confident it poses no risk. 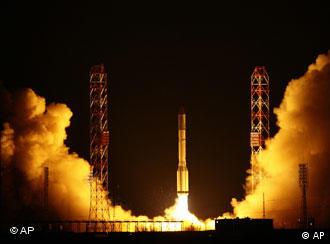 The satellite in question went up in 1987

A German space expert has rejected concerns about an old nuclear-powered Soviet satellite which is breaking up in space, saying its orbit appears stable and the fuel on board is not very radioactive anymore.

US space watchers highlighted the fate of Cosmos 1818 two weeks ago. A article in the January issue of Orbital Debris Quarterly News, published by the US National Aeronautics and Space Administration (NASA), revealed it was strewing parts.

Heiner Klinkrad, a specialist in space junk at the European Space Agency (ESA) office in Darmstadt, Germany, said in an interview with the DPA news agency that he saw no danger.

"The satellite is still in a stable orbit," said Klinkrad, who heads the ESA department tracking orbital debris. He said NASA's Space Surveillance Network was keeping it under observation.

No indication of an explosion

The fragments were only moving away slowly from the satellite, which indicated there had not been any explosion on board.

"Only a high-energy explosion would be capable of destabilizing its orbital path," said Klinkrad. He suggested paint or other surface material was coming free, or a coolant system had sprung a leak, perhaps after impact by a piece of high-speed space junk.

Launched by the former Soviet Union in February 1987, the satellite was intended to evaluate a nuclear-reactor power supply.

It was still at an altitude of 800 kilometres and its orbit had not slowed, Klinkrad said, adding that even if Cosmos 1818 were to slow down and tumble to earth, this would be no disaster.

"The reactor on the satellite was shut down 20 years ago," he said. "In that time, the radioactivity in the idle reactor would have declined to less than one-thousandth of its original level."

The German military commissioned its first spy-in-the-sky satellite system on Thursday, Dec. 4 enabling it to peek through clouds or the darkness of night at any spot on the planet. (04.12.2008)

Nearly four years after the devastating Asian Tsunami of December 2004 which claimed 230,000 lives, an early-warning system developed and funded with German assistance is set to begin operation. (11.11.2008)

India Shoots for the Moon With German Technology Aboard

Instruments developed by scientists in Germany will play a vital part in the scientific success of India's first mission to the moon. The launch is part of a deepening relationship between the two countries. (22.10.2008)

The ongoing conflict in Ukraine has cast doubt over the future of the cooperative space program. A Russian capsule was sent to to the station to bring a US astronaut back to Earth.