German Ex-Minister Gets Prison Time | Germany| News and in-depth reporting from Berlin and beyond | DW | 12.08.2005

A German court on Friday sentenced Ludwig-Holger Pfahls, a former deputy defense minister, to 27 months in prison on bribery and tax evasion charges in an arms deal. 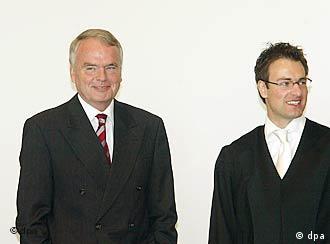 Pfahls (left) could be free as early as September

Judges found Pfahls guilty of tax evasion and accepting bribes, but gave him a lenient sentence because the 62-year-old had confessed that he had accepted almost two million euros ($2.5 million) from arms lobbyist Karlheinz Schreiber in connection with the sale of arms to Saudi Arabia.

Pfahls, who served as state secretary for defense from 1987 to 1992, insisted that he had not done anything in return for the money.

Presiding judge Maximilian Hofmeister said that while Pfahls may have greased the wheels for the deal, he had not directly violated the duties of his office.

"You accepted money without being corrupt," Hofmeister told the defendant while reading the verdict. "You were working on commission." 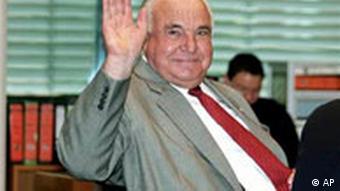 Former German Chancellor Helmut Kohl in court during the Pfahls trial on Aug. 3

Several highest-ranking former government officials, including former Chancellor Helmut Kohl and former Foreign Minister Hans-Dietrich Genscher, had testified during the trial that Pfahls had not influenced a controversial sale of tanks to Saudi Arabia during the 1991 Gulf War.

After five years on the run, Pfahls was arrested in Paris by French and German police in July 2004 and extradited to Germany in January. He could be released as early as September because his time in French and German custody will be counted against the sentence.

When half the sentence has been served, the judges may convert the rest of the prison time to a suspended sentence.

The sentence was in line with an agreement between the prosecution, the defense and the court ahead of the trial that limited his total jail time to two years and three months if nothing during the trial contradicted the admission he made.

Because Kohl confirmed that the defendant had had no political influence over the armored vehicles deal, the prosecution dropped the more serious corruption charge the day of the former chancellor's testimony.

A the start of his trial on separate tax evasion and corruption charges over an arms deal with Saudi Arabia, former German Junior Defense Minister Ludwig-Holger Pfahls admitted in court Tuesday to accepting bribes. (June 28, 2005)

The corruption trial of Holger Pfahls took a key turn on Wednesday with the testimony of ex-Chancellor Helmut Kohl, who effectively cleared the former junior defense minister of suspicions of bribery. (Aug. 3, 2005)

Former junior cabinet minister Holger Pfahls, one of Germany’s most wanted men, was returned to the country Thursday after being captured in France last year. (Jan. 20, 2005)