Angela Merkel has won a fourth term, but official results have shown she'll have a "tough road" for coalition talks. While the CDU remains the largest party, the far-right AfD will be the third biggest political force. 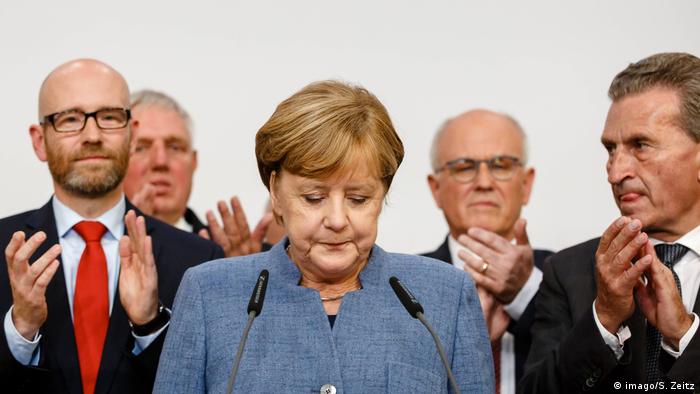 With all 299 constituencies reporting, Chancellor Angela Merkel's Christian Democratic Union (CDU) and its Bavarian sister party the CSU came out ahead in Germany's national election on Sunday, with 33 percent of the vote.

Rival Social Democrats (SPD) led by Martin Schulz tumbled to a mere 20.5 percent, while the Green and Left parties remained about the same as they did in 2013, each with 8.9 and 9.2 percent, respectively.

The only real success stories of the night were for the pro-business Free Democrats (FDP) and far-right Alternative for Germany (AfD). After failing to make the 5-percent hurdle to enter the Bundestag last time around, the FDP managed a 10.7 percent to cement its comeback.

As for the populist AfD, a remarkable showing of 12.6 percent means that Germany will have a far-right party in parliament for the first time in more than half a century.

Follow the night's events as they unfolded in our live ticker.

Although these results mean the CDU will remain Germany's largest party, it still represents a substantial loss for the conservatives, who managed 41.5 percent in 2013. With a three-way coalition looking to be the likely solution to avoid a minority government, Merkel is about to begin a far less stable administration than in her past three terms.

"We had hoped for a better result," Merkel told a clapping but subdued crowd at party headquarters in Berlin. Later, she spoke of the "tough weeks ahead," for the CDU, and promised to recover votes lost to the AfD — the closest she came to mentioning the slide of the CDU toward the center of the political spectrum under her leadership.

Merkel said she was "confident," however, that Germany would have a new government by Christmas.

The SPD were also left licking their wounds, as Germany's oldest existing political party hit a post-war low after failing to differentiate itself enough from the CDU, having ruled together for the past four years in a "grand coalition." Schulz said it marked a "bitter hour" in "the history of Social Democracy."

Traditionally, the leaders of all the parties who have seats in the Bundestag gather after the initial results are announced for a roundtable on the election.

During the discussion, Schulz — who briefly led the polls in January and February before slipping steadily behind Merkel from then on — tried his best to get out his last barbs at the chancellor, calling her the "biggest loser" of the night.

"The grand coalition has been voted out," said Schulz, promising his party would not rule with the CDU again, and instead become leader of the opposition. "This government has been unelected, and you, chancellor, are the biggest loser."

The SPD then announced it would be sending around a survey to voters to ask them what concerns the party had failed to respond to, with the Social Democrats losing votes to every other party but Merkel's, down more than 5 percentage points from the 2013 election.

The chancellor called Schulz's comments "sad," and reminded the public that the CDU was "clearly the strongest party."

Strongest party they may be, but the future is anything but certain. Merkel has said she does not want to lead a minority government, which leaves the only viable option a three-way coalition with the Free Democrats (FDP) and Green parties — the first three-party administration since the 1950s.

The FDP and Greens have significant ideological differences to overcome if they are to rule together with the CDU in a so-called "Jamaica" coalition.

While they have a similar demographic of well-educated, high-income voters, they differ drastically in matters of environmental protection and open support of private business.

On top of that, most Green voters say they prefer their traditional role as a voice of opposition, especially over ruling with the conservatives.

Perhaps the biggest upset of the election was the 12.6 percent achieved by the nationalist AfD, making them the third-largest party in the Bundestag. Many Germans were understandably concerned about a far-right party entering parliament for the first time in more than 50 years.

However, the nationalists only won three constituencies outright — all in the state of Saxony, where the AfD had its best showing. This includes a victory for sidelined co-head Frauke Petry, who won her district. Party leaders Alexander Gauland and Alice Weidel will enter the Bundestag via the "second vote" Germans cast for an entire party, after the "first vote" for their constituency's representative.

In opposition to the AfD's victory, spontaneous protests erupted across Germany, particularly in major cities like Cologne, Berlin and Hamburg. Chanting "Nazis out!" hundreds of demonstrators gathered in Berlin's Alexanderplatz until well past midnight.

The AfD tried to downplay the criticism. Although it has taken an official stance against Islam, gay marriage and Germany's refugee policy, as well as seen many of its members embroiled in anti-Semitic controversies, co-chair Jörg Meuthen insisted the party is "neither racist nor xenophobic."

Meanwhile, the party's Gauland promised to "hound" Merkel's government, saying the AfD would "reclaim" Germany from its current leaders.

Voted into 95 seats mostly by voters in Germany's eastern, former communist states, the AfD will certainly have the means to do so.

However, as many Germans noted on social media, 87 percent of Germans did not cast a ballot for the nationalists — and although Merkel noted that the AfD would be a "challenge" for the new administration, it would be far from the first challenge for the four-time chancellor.

The rise of the far-right AfD and losses for two major parties in Germany's election may have shaken up the country's political landscape in a dramatic fashion. But the key takeaway in the US is more mundane. (25.09.2017)