Germany's Education Minister Annette Schavan has announced her resignation. The plagiarism scandal is the second in Chancellor Angela Merkel's Cabinet and comes just months ahead of the fall general elections. 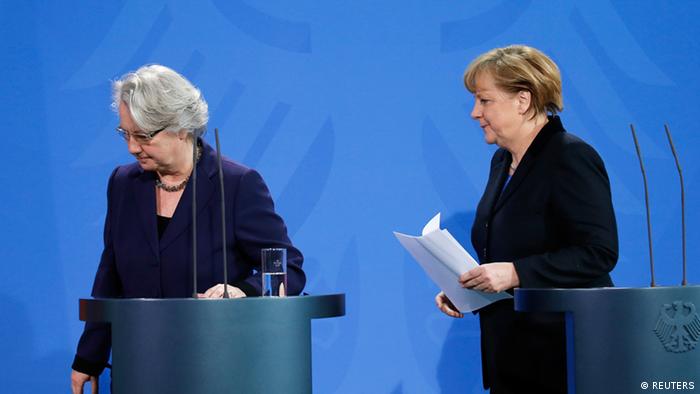 Education Minister Annette Schavan appeared before reporters in Berlin on Saturday, alongside the chancellor, to announce her resignation. The decision came several days after the University of Düsseldorf stripped her of her doctorate on plagiarism findings.

Chancellor Merkel said she had accepted Schavan's resignation "with a heavy heart" and praised her professional accomplishments as a politician whose career in education had spanned 17 years, saying Germany "had much to thank her for."

The education minister spoke briefly to the press about her decision. "I will not accept the decision and will take legal action against it," Schavan told reporters. "When an [education] minister sues a university, then that comes with strains, for my office, for the ministry, the government and for the Christian Democrats. I want to avoid just that."

Schavan will be replaced by education politician Johanna Wanka.

The investigation against the education minister, who belongs to Chancellor Merkel's party, the Christian Democratic Union (CDU), began last May when an anonymous user posted allegations of plagiarism against Schavan online. The probe came to an end on Tuesday when the humanities faculty council of the University of Düsseldorf voted to strip Schavan of her doctorate.

Former Education Minister Annette Schavan has suffered the consequences of the plagiarism scandal surrounding her doctorate. Four days after Heinrich Heine University revoked her title, Schavan resigned from her post. (10.02.2013)

The council said it had found proof that she had "systematically and deliberately" presented intellectual efforts that she herself had not generated. A failure to properly cite sources was also one of the findings of the council's probe into the plagiarism allegations.

Schavan had rejected the charges over the period of several months, but did admit early this year that her work could have diverged from standard citation rules.

In October, the German news magazine Der Spiegel published a report that indicated the expert had found evidence of plagiarism in passages on 60 of the 351 pages of her 1980 dissertation entitled "People and Conscience."

The controversy could negatively impact Merkel ahead of the September national elections, as the latest shake up in Merkel's Cabinet is not the first.

In early 2011, then-Defense Minister Karl-Theodor zu Guttenberg stepped down after losing his doctorate from the University of Bayreuth for similar reasons. Schavan was one of the first to condemn Guttenberg for plagiarizing his doctoral thesis, calling it "shameful."