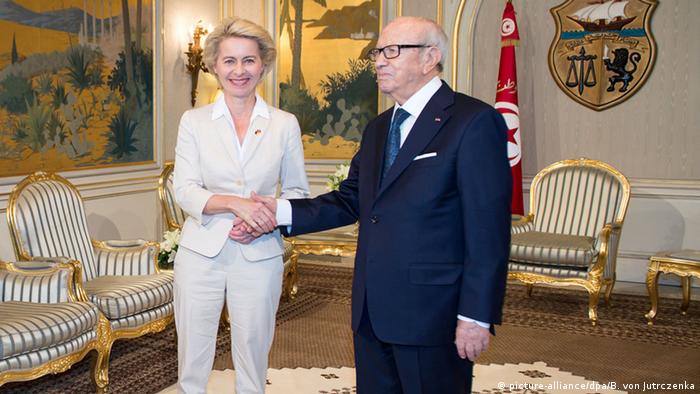 Von der Leyen has pledged 1.2 million euros in aid ($1.32 million) to Tunisia's government as well as military equipment like a floating dock used for shop maintenance and a barge. She has also promised to deliver five Unimog trucks, 700 binoculars and 3,000 helmets.

The German defense minister arrived in Tunis from a two-day visit in Mali on Tuesday night. On Wednesday, she met President Beji Caid Essebsi before speaking to her Tunisian counterpart Farhat Horchani as well as several lawmakers.

She will also stop off at the Bardo museum, where 20 tourists and a policeman were killed on March 18. It happened three months before 38 tourists were killed near the Tunisian holiday resort of Sousse on June 26. Both attacks have been claimed by militant Islamist group "Islamic State" (IS).

Since then, the government has deployed 100,000 additional army and police units around the country, including 3,000 dedicated to guarding hotels and tourist sites.

Last week, Tunisia also passed new anti-terror legislation, which was fast-tracked through parliament after having languished there for years.

Critics have pointed out, though, that the law could lead to human rights violations. It allows the authorities, for example, to raise the amount of time police can hold a suspect without charge and contact with a lawyer from six days to 15.

Tunisia is the only country that emerged with a democracy from the 2011 Arab Spring countries, but a rise in attacks by Islamic radicals have prompted the new government to focus on stability and security over personal freedoms.

The EU is currently debating an advisory mission to stabilize the country by helping with border controls and measures to protect the tourism sector and prevent radicalization.

Tunisia will also be granted faster access to 23 million euros ($25 million) that had been earmarked for security sector reforms next year.

In Tunisia, many young people heed the call of 'IS' and al Qaeda

More than 5,000 Tunisians are currently fighting for al Qaeda and the "Islamic State." Extremists have been especially successful at recruiting youth there. Sarah Mersch reports from Tunis. (26.07.2015)