German-Czech relations positive despite the past | Germany | News and in-depth reporting from Berlin and beyond | DW | 03.04.2012

Germany and its southeastern neighbor have had a checkered past. But 20 years after a friendship treaty, war wounds appear to have largely healed. That's a good thing as the German Chancellor visits Prague. 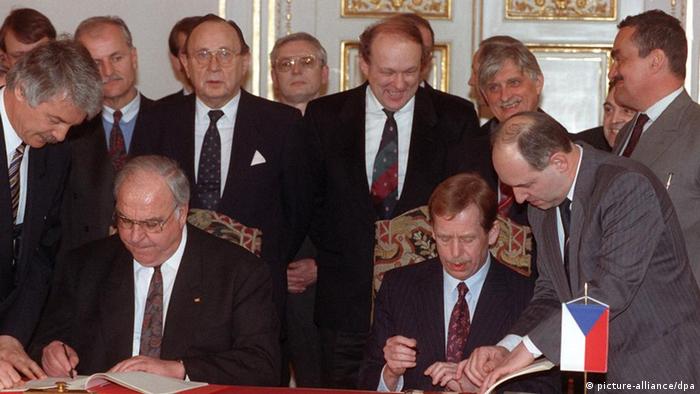 In their historic meeting on February 27, 1992, German Chancellor Helmut Kohl and Czech President Vaclav Havel sought to conquer the ghosts of the past in setting a new foundation between their nations.

The resulting "Agreement on Neighborliness and Friendly Cooperation" focused largely on the future. Issues from the past were brushed over, coming up "only generally," said Milos Reznik of Chemnitz University.

One reference to the past could be found in the agreement's passages concerning members of the German minority in the Czech and Slovak Federal Republic. People of Czech or Slovak descent in Germany were also discussed.

The agreement guaranteed each group the right to practice "their ethnic, cultural, linguistic and religious identity," free from discrimination "and in full equality before the law."

Transgressions on both sides 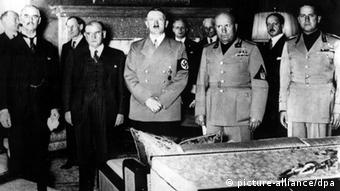 More than 50 years earlier, Adolf Hitler used similar words in the Munich Treaty as he started on the destruction of the Czech state in 1938. The Sudetenland, a largely German-speaking region within Czech borders, became incorporated into the German Reich. A year later, the rest of the Czech nation was annexed and occupied.

The Nazis went on to commit atrocities against the country's Jewish population. The assassination of a high-ranking Nazi official by a Czech resistance fighter prompted a ferocious response. In 1942, the Nazis destroyed the Czech village of Lidice, massacring the residents in an "act of reprisal."

After the end of World War Two, Czechs repaid the actions in kind by massacring the German minority within their borders by the thousands. About 3 million Sudeten Germans were forced to abandon their homes, and their property was confiscated under the so-called "Benes Decrees" - named after then-president Edvard Benes. 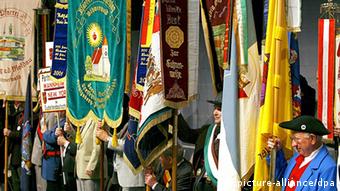 The question of who was at fault for the mutual atrocities colored German-Czech relations for decades to come. Displaced Sudeten Germans, who also had influential proponents in the conservative CDU and CSU parties, continued to demand recognition and compensation.

Prague, on the other hand, saw the expulsion as a direct consequence of German aggression and occupation.

This hardly formed a good basis for restarting German-Czech relations after the Cold War. In 1992, Kohl and Havel thought it best to "remain silent on this question," said Christian Tomuschat, a professor of international law at the Humboldt University in Berlin.

Tomuschat told DW that a bilateral treaty would be internationally binding, so any agreement could potentially have wide-reaching consequences - including financial ones. 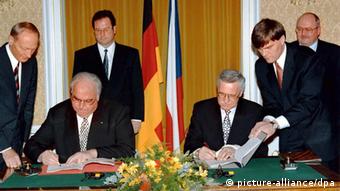 Helmut Kohl and Vaclav Klaus sign the 1997 declaration in Prague

The two countries took another step together five years later with the "German-Czech Declaration on Mutual Relations." In this document, signed by the German and Czech heads of state, both sides took positions on the tragic events of the past. Both countries' parliaments gave their seal of approval, too.

The German side acknowledged responsibility in triggering "National Socialist policies of violence against the Czech people," saying this set the stage for wartime "flight, expulsion and forcible relocation."

Germany and the Czech Republic stated they "regretted" the respective atrocities.

Most importantly, both sides declared that their relationship "will not be burdened by political and legal questions coming from the past."

The declaration could be considered the final stroke on dealing with the past, and the nail in the coffin of German efforts to get reimbursed for the confiscation of Sudeten German property.

However, Tomuschat said the German government never officially acknowledged the expropriation because it could then be liable for providing compensation for damages.

"The dispossessed just had to accept that life goes on," and that the past can fall away, Tomuschat added.

Sporadic attempts in the Czech Republic continue to be made to politicize historic resentment against the Germans, said Reznik, who also acts as one of three chairpeople on the German-Czech Historical Commission. But such efforts take place less often they did 10 years ago, he added.

In his work, Reznik appeals for a new view in the history of both states. He doesn't suggest that people necessarily turn away from historical trauma, which he still views as socially relevant.

"But one should be able to show that there's more in the history of the relationship than trauma and conflict," Reznik said.

Chancellor Angela Merkel has begun a visit to Prague that's expected to focus on Czech objections to the EU's fiscal compliance pact and differences over nuclear power generation. (03.04.2012)

The very first foreign visit by a new head of state or government holds special political significance. But choosing the 'wrong' country might ruffle a few diplomatic feathers. (27.03.2012)

Bavaria has pledged to "seek dialogue" with the Czech Republic as the two neighbors still work to patch up differences over Prague's expulsion of over 3 million Germans from the Sudetenland after World War II. (12.06.2011)