Bayern Munich are heading to Berlin after crushing Bayer Leverkusen in emphatic fashion. Thomas Müller scored a 27-minute hat-trick during a devastating second half spell, raising Bayern's hopes of another treble. 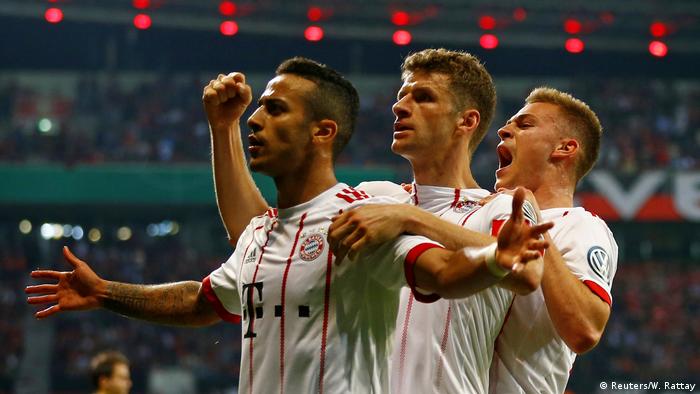 Thomas Müller scored a hat-trick as Bayern Munich turned on the style to sweep past Bayer Leverkusen and book their place in next month’s cup final in Berlin.

Read more: DW in Leverkusen — Hosts no obstacle for Bayern

Bayern were two goals up inside nine minutes, with Javi Martinez and then Robert Lewandowski striking to send Leverkusen into a spin. But the hosts steadied the ship soon after when Lars Bender pounced to take advantage of static Bayern defending, heading in from close range.

Leverkusen managed to stem the bleeding and get to the break without further damage, but worse was to come after the restart, when Bayern really turned on the style.

Müller struck his first from close-range to restore Bayern’s two-goal cushion and the impressive Thiago Alcantara, starting in place of James Rodriguez, found the bottom corner to make it four.

Leverkusen simply couldn’t get to grips with Müller though, and the Germany forward struck twice more with typically predatory finishing to make it six, each side of substitute Leon Bailey’s spectacular free-kick, which ultimately counted for nothing.

Bayern’s hopes of another treble under Jupp Heynckes are very much alive, while Leverkusen’s wait for silverware will enter a 26th year.

Bayern will face Schalke or Eintracht Frankfurt, managed by Bayern's future coach Niko Kovac, who go head-to-head in the second semi-final on Wednesday.

90' FT Bayer Leverkusen 2-6 Bayern Munich — An absolute rout in Leverkusen. Müller scores three as Jupp Heynckes side book their place in Berlin, and take another step closer to the treble.

89' Time is almost up for Leverkusen, whose wait for a first trophy since 1993 will go on. Bayern, on the other hand are looking irresistably good. Treble-winning form, dare I say.

87' Leno makes a fine couple of saves to stop it being seven.

85' Thiago makes way for James Rodriguez for the final few minutes. A fine display by the Spaniard tonight.

GOAL! Leverkusen 2-6 Bayern (Müller 78') Yep, it's six. A long ball over the top finds Müller, who rolls Henrichs with embrrassing ease, and finishes low past Leno. A hat-trick for Müller. A shambles for Leverkusen.

76' That really was the perfect free-kick by the Jamaican. Up and over and perfectly placed. A shame it will count for nothing.

GOAL! Leverkusen 2-5 Bayern (Bailey 73') Boooom! Bailey has pulled one back for Leverkusen with a perfect free-kick, which bends over the wall and inside the near post. But it'll be too little too late for the hosts.

66' A devastating spell by Bayern, who have torn Leverkusen to shreds at the start of this second half. There's no coming back from this.

GOAL! Leverkusen 1-5 Bayern (Müller 63') It's raining goals in Leverkusen, but they're all for Bayern. Rafinha's cross finds Robben, whose shot is redirected by Müller just in front of Leno. We're done here.

GOAL! Leverkusen 1-4 Bayern (Thiago 60'). Thiago makes it four and Bayern are surely heading to Berlin! Ribery threads a pass to Robben, who falls over the ball but accidentally sets up Thiago, who steadies himself and finds the bottom corner.

58' Chalked off! Volland puts the ball into the net from close range after a knock down from Lars Bender at a corner, but Volland had strayed offside and the flag is up.

54' Control has been restored for Bayern, which surely would have been the last orders Jupp Heynckes gave his players as they left the dressing room at half time.

GOAL! Leverkusen 1-3 Bayern (Müller 52') Müller strikes! Thiago picks him out and the Germany striker takes a touch and finishes calmly under Leno. The two-goal cushion has been restored.

50' Leverkusen chances! Leon Bailey has made a difference already. Leverkusen peppering the Bayern goal with shots, and Ulreich is forced into a fine save at his near post after a key block from Boateng.

45'+2 HT Leverkusen 1-2 Bayern. A breathless first half in Leverkusen! Two goals inside the opening 10 minutes had Bayern cruising, but Bender's header has halved the advantage. Big second half coming up.

44' The home fans making a racket and so they should. Their side have shown great character to fight back, and Heiko Herrlich will be satisfied if he can get them back into the locker room at 2-1.

42' Martinez leaps high at a free.kick, but nods just wide. Martinez has been a thorn in Leverkusen's side so far.

38' Incidentally, this is Ulreich's 50th appearance for Bayern tonight.

37' WHAT A SAVE! Huge save from Ulreich, low to his right! Bellarabi spanks a shot at goal and it seems destined for the bottom corner, but Ulreich gets a fine hand on it. Great shot, stunning save!

36' Boateng forced into some emergency defending as Havertz gets into the box and forces a corner off the Germany defender.

32' Some wonderful skill by Ribery before he is upended in a dangerous position on the left...

30' Martinez picks out Kimmich with a fine lofted ball and the young Germany star whips a fine ball across the face of the Leverkusen goal, that is sensibly turned out for a corner.

25' A great tempo to the game. Bayern still enjoying the better of the contest but both sides pushing forward at every opportunity. This is shaping up to be a memorable contest.

22' Leverkusen playing with a lot more freedom than you'd expect of a side who have conceded two goals to Bayern Munich inside the first ten minutes.

19' That was a crucial strike for Leverkusen, who had been totally overrun. But the crowd is upbeat again and the task for the hosts now is to stay in the contest for as long as possible.

16' GOAL! Leverkusen 1-2 Bayern (L. Bender 16') Leverkusen have one back! Bayern fail to clear, Havertz's shot is blocked, and Bender is on hand on nod in from close range. We have a game again!

12' Do Leverkusen have an answer here? It's a long, long road back from here.

6' Bayern all over Leverkusen here. The hosts just can't settle against a Bayern side who are raring to go.

3' GOAL! Leverkusen 0-1 Bayern (Martinez 3') Well, that didn't take long! Martinez thrashes the ball in on the rebound and, after some conversation between the officials about whether it was offside, the goal has been given.

20.40 James Rodriguez is on the bench for Bayern, but that means a start for Thiago Alcanatara in midfield. Rodriguez being given as much rest as possible ahead of that even more crucial Champions League semifinal against Real Madrid.

20.30 Hello! Welcome to live coverage of tonight's GermanCup semifinal between Bayer Leverkusen and Bayern Munich! Kick off is just 15 minutes away.