Molecular gastronomy champions unconventional tastes and textures and the revolutionary way of cooking is showing up in German restaurants as chefs use unconventional methods to invent unusual food. 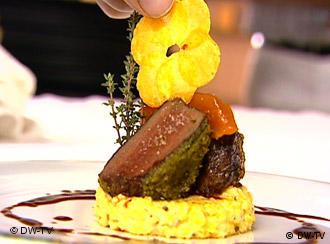 Molecular cooking can make everything else look boring

Licorice is paired with salmon. Caviar gets served atop white chocolate or warm ice cream. If a dish sounds like it defies the laws of nature, it's likely a matter of molecular gastronomy, an approach to cooking that has entered the mainstream over the past few years.

The most well known practitioner of this innovative way of cooking is Spain's three-star chef Ferran Adria. At the beginning of the new millennium he grabbed headlines with creations such as apple caviar, parmesan spaghetti and blackberry-tobacco sorbet.

A drizzle of science 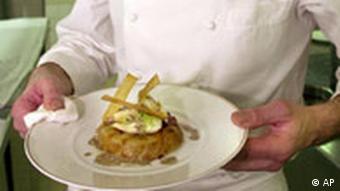 German cuisine is also receiving a molecular twist as more chefs turn to physics and chemistry to create unusual dining experiences. One practitioner of molecular gastronomy is the Düsseldorf-based chef Richard Nicolaus.

His restaurant, km 747, is located in a quiet area near the Rhine River. The kitchen is a far cry from the typical mad scientist's laboratory with nary a test tube or microscope in sight. The science begins when Nicolaus starts cooking.

"We're going to make a satay skewer from tuna fish, and what's different is that the tuna fish will be fried in a sugar water mixture at 120 degrees (Celsius)," Nicolaus said.

Normally, the tuna would be cooked in oil, leaving it fatty. By using a special type of sugar that heats like oil, Nicolaus can cook the tuna and have it ready to serve in 10 seconds.

"From the outside it's almost crispy," he said. "I'll drizzle a little with lemon over it and then season it with a fish-vegetable mixture."

The tuna fish creation is only one of many. Guests can also try tomato jelly or cucumber foam. For each dish on the menu, Nicolaus uses a different trick from the molecular cooking world. Sauces are transformed into foam. Meat is cooked in a vacuum. With the help of new substances he creates completely new consistencies. 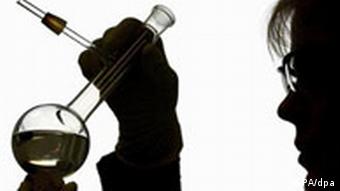 Cooks are starting to think -- and act -- like chemists

"People nowadays want to experience new things," he said. "They want to discover new tastes and it happens that science brings the possibility for new products like, for example, jellies or chemicals."

The Düsseldorf native came to molecular cooking via mechanical engineering. For 10 years he'd cooked as a hobby. But when he got the chance, he gladly exchanged a drawing table and compass for an oven and ladle and his background in mechanical engineering made it feel natural to experiment in the kitchen with the design and form of his culinary creations.

"For me, the combination is important," Schuch said. "A pea-mint purée, I have never eaten that way. But when you taste it, it's absolutely a culinary delight, and it's obviously also visually interesting."

Guests often ask Nicolaus why, for example, the spinach on their plate forms a small tower instead of looking like its normal squishy self. They want to know how he gets the duck breast so tender and how he made the seafood risotto. Nicolaus said he chats willingly about his cooking concept.

But he doesn't give diners much hope that they can recreate his food creations. Nicolaus spends a lot of time experimenting and honing his specialized techniques that, like all excellent cooking, require more effort than simply mixing ingredients together.

Have Your Cake and Eat It Too

In Germany, enjoying coffee and cake in the afternoon isn't just for grannies. Making cakes -- and eating them too, of course -- are a long-standing tradition and many German cake recipes are known around the world. (07.02.2007)

Germany a gourmet paradise? Don't scoff -- the land of sauerkraut and schnitzel is second only to France when it comes to Michelin three-star restaurants. (26.11.2005)