The case concerned a student who became severely disabled after collapsing in gym class. He sued, arguing his teacher should have done first aid. Germany's highest criminal court ruled in his favor, but only to a point. 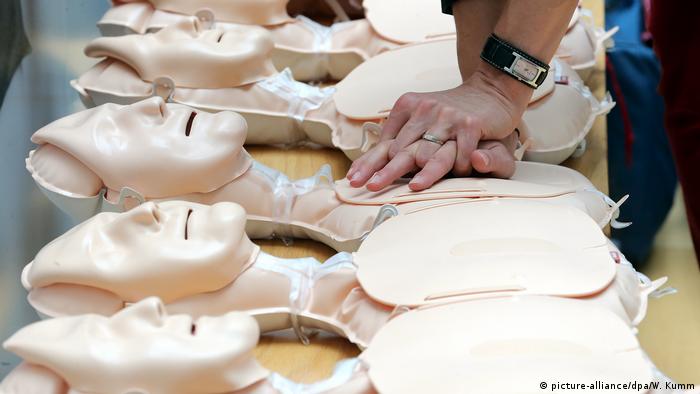 Gym teachers must use first aid in the event of an emergency and they must be up-to-date on techniques, the Federal Court of Justice (BGH) ruled on Thursday.

The case involved a young man who sued the German state of Hesse after he collapsed in gym class and became severely disabled. The state previously argued that the teacher was not liable, but Germany's highest criminal court disagreed.

What the court ruled:

In January 2013, an 18-year-old student at a high school in the German city of Wiesbaden suddenly collapsed during a warm-up at his gym class.

The teacher quickly called for an ambulance and positioned the boy on his side. She did not, however, attempt to revive him and CPR was only delivered eight minutes later when the ambulance arrived at the school.

The student, who is now 24-years-old, ended up suffering irreversible brain damage due to a lack of oxygen and is now severely disabled.

Germany's 'Good Samaritan' law: In Germany, it is illegal to not provide help for someone who is in peril, for example in the event of a car accident or other emergency. People who deliver first aid or are the first on the scene are typically protected from being held liable for offering help, but the court ruled this does not apply to teachers.

What happens next: The case has been sent back to the Frankfurt higher regional court for review. A court expert will have to review whether or not the brain damage and other disabilities were directly caused by the teacher not performing CPR. Then the court will determine whether to award the damages.

What should you have in a travel first-aid kit?

A kangaroo's day at the beach went terribly wrong when he inhaled sea water while in the surf. Two police officers saved him and brought him back to life. (28.10.2018)