The Constitutional Court has refused to lift a ban on a rally for the right to protest during the coronavirus lockdown. But it said the organizer was still free to lodge a constitutional complaint. 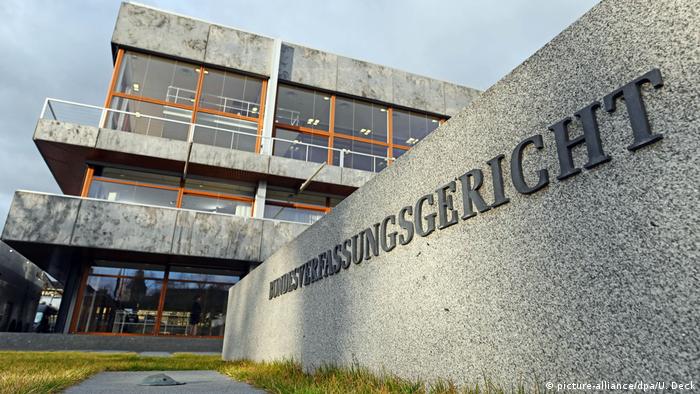 A demonstration planned for Thursday calling for the right to protest even amid social-distancing restrictions imposed during the coronavirus pandemic did not receive a last-minute reprieve from Germany's Federal Constitutional Court.

The three-hour protest calling for "the protection of the right to assemble even during the coronavirus crisis" was to have taken place on Thursday afternoon on the banks of the Isar River in the southern city of Munich. It was banned by an administrative tribunal in the morning of that day, partly because of fears that more than the 10 people registered to attend would take part, making social distancing difficult to police.

The organizer lodged an appeal with the Constitutional Court on Thursday afternoon calling for the ban to be overturned. Judges there recognized the "importance of the right to assembly for a free political order" and democracy but did not overturn the original ban, saying that reasons of health and safety overruled such issues for the time being. They also said the appeal came too late in the day for the issue to be given due consideration.

But they said that Thursday's ruling did not mean that the issue of freedom of assembly under the current restrictions was settled once and for all.

Germany has strict laws protecting freedom of assembly but also regarding the conditions under which public gatherings can take place.

The coronavirus is increasingly prevalent in German nursing homes. In order to prevent infections, many want to separate the seniors from the outside world — but this comes at a cost to the elderly and their families. (09.04.2020)

About 4,000 demonstrators took to the streets in Munich, as Germany is preparing to host leaders from the G-7 countries. The activists are calling on the world's seven largest "advanced" economies to take greater action against climate change and global poverty.

Opinion: German team not taking a knee in protest, in Budapest, missed an opportunity 12.06.2022

Germany's Nations League draw against Hungary in Budapest was disappointing. But even more disappointing was the team's failure to demonstrate what they stand for while there, DW's Jonathan Harding writes.

Protests against the war continue to be held in cities across Europe. On Wednesday, thousands of people gathered in the German city of Munich to show their solidarity with the people of Ukraine.