Millions of German voters have used Wahl-O-Mat, the country's official voting advice application, but a court in the city of Cologne has banned the app for putting smaller parties at a disadvantage. 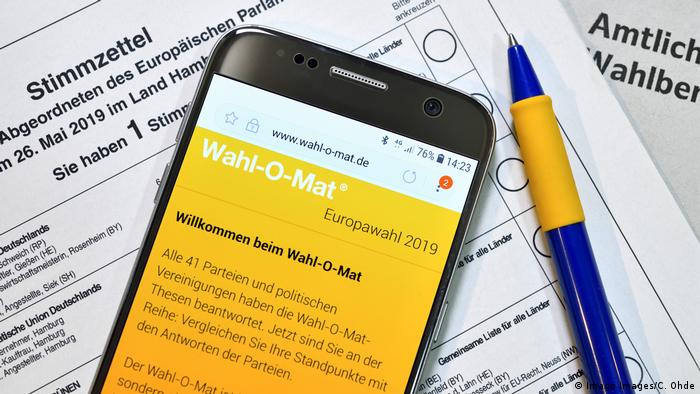 Wahl-O-Mat (vote-o-meter) Germany's official voting advice application (VAA), was banned on Monday by a court in Cologne until the Federal Agency for Civic Education (bpb) revises its software.

The court said that Wahl-O-Mat offered advice about up to eight political parties, which was a disadvantage for smaller and more unknown parties. Its display mechanism thus violates the constitutional right to equal opportunities, it added. The fringe party Volt Deutschland had triggered the legal proceedings, arguing that the app didn't provide adequate "access to political information." The party stressed that it did not want Wahl-O-Mat to be scrapped, but merely improved upon.

A bpb spokesman confirmed that the popular app had been switched off, but said he regretted the court's decision.

"The Wahl-O-Mat has been very successful in increasing political participation. It is even used by millions of people in the European elections. We will examine the verdict and in the next days decide whether to appeal [against the verdict] or revise the software to include smaller parties in the app," the spokesman said.

Read more: Undecided French voter? There's an app for that!

The Federal Agency for Civic Education, which is responsible for the app's content, has so far maintained that the software could not be technically modified to include significantly more parties. But the court ruled that the agency's claim was "not sufficiently credible."

Since first launching in 2002, Wahl-O-Mat has become an ingrained part of the German election process. In 2017, Thomas Krüger, the president of the bpb, described the voter tool as Germany's "democratic national sport."

While VVAs exist in many countries, few boast the kind of fanfare enjoyed by Germany's Wahl-O-Mat. According to Krüger, some 13.3 million users used the tool ahead of the federal election in 2013 and, according to market research firm YouGov, one in three voters consulted the app in the weeks leading up to the 2017 election.

Since its inception 15 years ago, the Wahl-O-Mat's main focus has been to mobilize younger voters, which has contributed to higher voter turnout.