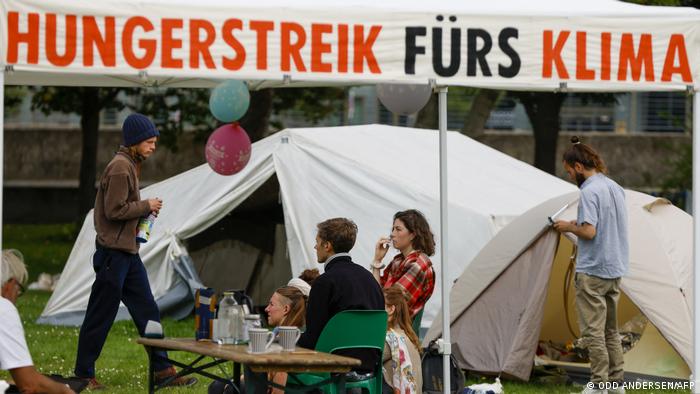 The 21-year-old Henning Jeschke had been part of a group that began a hunger strike on August 30 close to Berlin's Reichstag building. The 24-year-old Lea Bonasera joined the group on Monday.

They had demanded a public meeting with the three main chancellor candidates ahead of Sunday's election — Olaf Scholz from the center-left SPD, Armin Laschet from the conservative CDU, and Annalena Baerbock from the Greens.

Most participants broke off their strike on Thursday after none of the three politicians initially agreed to meet them.

Jeschke wrote on Twitter on Saturday evening that Scholz had called and promised a "public discussion on the climate emergency within the next four weeks."

Scholz said he was "glad the hunger strikers are now eating and drinking again." He promised to keep his word about the offer of a discussion after the election.

How dangerous was the hunger strike?

Jeschke said he had "no strength left" after 27 days on hunger strike. Earlier on Saturday, the pair refused to drink any liquids. That put them in a dangerous situation. Without water, the body can suffer serious health consequences and eventually death within just a few days. The activists are in a more critical condition as their ongoing hunger strike has weakened them.

The so-called "team dry hunger strike" shared a message to Olaf Scholz on social media, claiming that the center-left candidate is "not able to rule the country if he cannot accept the scientific reality. The fact [is] that we are in an absolute climate emergency!"

The duo said they were addressing Scholz as they believed he was the mostly likely candidate to become Germany's next chancellor.

Fridays for Future demand an end to empty promises

"We're in a climate crisis and have to take the necessary steps to prevent a catastrophe," Bonasera said. Jeschke added that as the world's fourth-largest industrial nation, Germany has a special responsibility to deal with the climate.

Supporters said that the two were under medical observation.

Moritz Sommer, chairman of the Berlin-based Institute for Protest and Movement Research, told German newspaper Tagesspiegel that the climate movement was not showing signs of radicalizing, unlike the growing movement of conspiracy theorists.

"A hunger strike is a very radical method, that large parts of the climate movement view critically," he said.