Crispy goose or suger-covered raisin cake: Good food belongs to German Christmas celebrations as much as the Christmas tree. And many a traditional dish dates back to medieval times or even earlier. 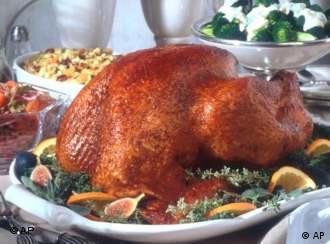 Before they adopted Christianity, Germanic peoples celebrated winter solstice around the same time as Christmas. Meals were cooked from whatever the year's harvest brought in -- grains, conserved fruit, potatoes. Everything was dished out for the holidays in one form or another.

Nowadays, many Germans eat only salad or fish -- a Christian symbol since medieval times -- on Christmas Eve. On the first day of Christmas, Dec. 25, they take to the table for a massive roast lunch. Traditionally, Germans tuck into goose, and it remains popular.

Just after the feast of St. Martin on Nov. 10, which Germans also celebrate with a meal of goose, farmers work to quickly fatten up their birds to meet the huge Christmas demand for geese. Even so, Germany still has to import them from Poland and Hungary. Siegrid Höltel, who runs a farms that raises geese near Cologne, doesn't put great stock in fattening up geese. 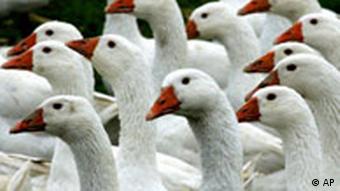 Due to fears of bird flu, geese had to remain in their stalls this year

"Geese that have only been kept in their stalls and fattened up are really something different than geese that are allowed to graze in fields all summer long. They're more tender and lean."

The tradition of roast goose at Christmas is centuries' old. In 1588, Queen Elizabeth I of England ordered everyone to have roast goose for their Christmas meal because it was the what she had been doing when news of the English victory over the Spanish Armada reached her. Goose then became the traditional Christmas dish in England and spread from there to Germany.

But there's more to the Christmas goose tradition than just that. In earlier times, Christians didn't only fast at Easter but also during the 40 days between St. Martin's Day and Christmas. On the first day of Christmas, Germans broke the fast with goose.

Goods for the gods 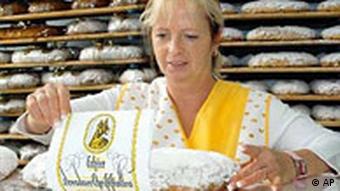 Stollen from Dresden is famous around the world

Baking at Christmas also dates back to an earlier time. The Germanic tribes offered the food as gifts to the gods.

Even the calorie-conscious would be loath to avoid the baked goods that mark German Christmas, including gingerbread cookies and stollen, a fruitcake with raisins and sometimes marzipan. The latter, the most well-known of German holiday loaves, was created in 1457 by a cook at Hartenstein Castle near Torgau. Covered in powdered sugar, the cake vaguely resembles a baby wrapped in a blanket -- to bring to mind the birth of Jesus Christ.

Supposedly it's bad luck to cut the stollen before the holiday. On the other hand, if everyone gathers to eat it after Christmas Eve mass, the entire household will be protected and blessed. But it seems that Germans are no longer concerned by such superstition -- years ago supermarkets started selling stollen as early as late summer.

Each year, tourists from around the globe flock to Germany's traditional Christmas markets. But a new kind of market lets visitors experience the holiday as it was celebrated hundreds of years ago. (Dec. 3, 2005)