Helge Braun, head of the Angela Merkel's chancellery, has celebrated US plans to stay in the WHO. In the same interview, he left the door open to EU border restrictions in tackling COVID-19, but said this was not ideal. 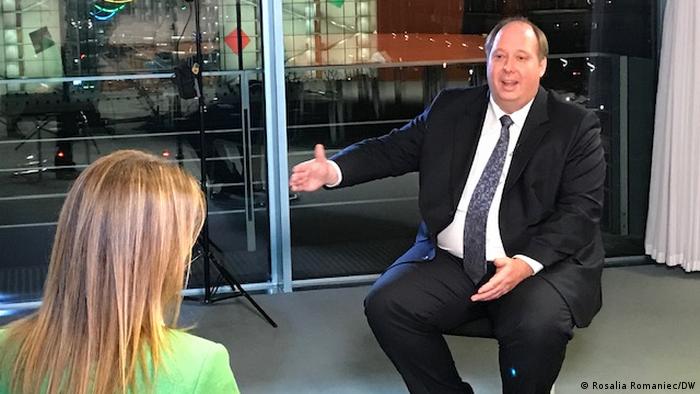 The head of the German chancellery, Helge Braun, celebrated US President Joe Biden's plans to keep the United States in the World Health Organization, in a DW interview on Wednesday.

Biden plans to halt the US withdrawal process from the WHO — initiated by his predecessor Donald Trump — as well as signing up to the COVAX alliance to secure COVID-19 vaccines for poorer countries.

Braun, who is a medical doctor, told DW this was "a very, very good sign, because the WHO is an enormously important organization."

"I think we need a stronger WHO to respond directly to pandemics. And, of course, we also need stronger support. This will only be possible if the contributions of the member states and the contributions to international relief teams are increased when an outbreak occurs somewhere."

"After Ebola, we had already started to build up structures for this in Europe. This is very, very important, because it is the best way to detect an outbreak early, to fight it regionally and thus effectively prevent it from spreading worldwide."

Braun told DW that Trump's presidency was part of a broader pattern in recent years that has seen moves away from multilateralism. He said Germany had high hopes for Biden, and that it hoped to tackle climate change, the pandemic and trade with multilateral approaches that included the United States.

"I think the presidency of Donald Trump is actually a bit pars pro toto (a Latin phrase meaning ‘a part taken for the whole')in terms of our recent years. We've seen a lot that. We've also had heads of state and heads of government who have taken a strong and critical stance on multilateralism," Braun said.

"I think, especially in this pandemic, it shows again how important international cooperation and collaboration is. And that's why we're pleased to have Joe Biden inaugurated today."

Maas: 'We are looking forward to working together with him'

Speaking on the pandemic, Braun said it was important that the European Union act in unity to fight the coronavirus, but that EU border closures would be the "worst way forward."

"We saw in March that when everybody introduced measures at the same time, the restrictions worked well and then in the winter months it became very different. One country with high numbers would close, while in the neighboring country the numbers were low. But then, you always infect each other."

"Therefore, if we want to keep the mutations low, together with our neighboring countries, we all have to act together synchronously."

"If we succeed in doing that, then we can get by without tightening entry measures. And that, of course, is the very best way. Freedom of movement in Europe is a great value to us."

However, he left open the possibility of closing borders with immediate neighbors if a unified approach could not be found and if infection rates necessitated it.

He said this could be triggered by outbreaks of the more contagious coronavirus variants, such as the B.1.1.7 variant, which has taken hold across the UK and spread to other countries including Germany.

EU officials are cautiously optimistic about post-Trump US

Amid calls for autonomy, EU looks to improve ties with US