Under the motto "love wins," the Church of St. Benedict in Munich is one of four in Bavaria set to defy the Vatican and bless same-sex relationships. 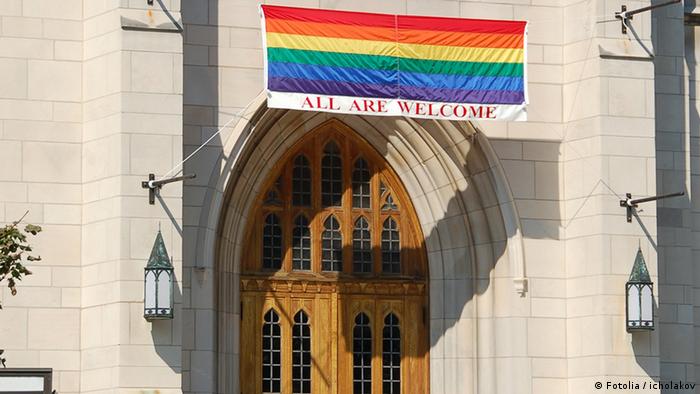 Catholic churches in the southern German state of Bavaria are set to hold services on Sunday to bless same-sex couples, local media reported.

The decision by the Church of St. Benedict in Munich, and three churches in Würzburg, comes in spite of Vatican teachings that the Catholic Church should not bless same-sex relationships.

"It was not so easy to find a church," said Renate Spannig, spokesperson for Maria 2.0, which is co-organizing the Munich service scheduled for 4:30 p.m. local time (1430 GMT/UTC).

Maria 2.0, a grass-roots reform initiative, has called for several similar services around Germany under the motto "love wins," a week ahead of the International Day Against Homophobia.

Germany's Catholic News Agency (KNA) reported that more than 100 services were organized for the first half of May to bless same-sex unions.

Other churches in Frankfurt, Cologne, Aachen and Berlin are expected to participate.

One of the initiative organizers, Pastor Bernd Mönkebüscher from the Archdiocese of Paderborn, was quoted by broadcaster Deutschlandfunk as saying that he had heard no convincing argument to forbid him from such blessings.

"When people ask for a blessing for their love and partnership, who am I to appear as a church and say... that is [a] sin," Mönkebüscher said.

In March, The Catholic Church affirmed its policy of welcoming gays in the church but stated that priests "cannot bless sin."

The Vatican's announcement upset German Catholics eager to see the church embrace what it sees as a more progressive approach to same-sex partnerships.

More than 230 theology professors from Germany, Austria, Switzerland and the Netherlands distanced themselves from the Vatican's position on same-sex unions.