A prominent German bishop has offered his resignation to the pope, over charges of beating children under his supervision. Meanwhile, more and more German Catholics are leaving their scandal-plagued church. Even Mixa's closest allies deserted him

The bishop of Augsburg, Walter Mixa, has written a letter to the pope offering his resignation after being accused of using violence against children in his care, and of misusing funds donated to a local orphanage.

His decision comes after senior figures in the German Catholic Church - who do not have the authority to call on him to resign -suggested he take a leave of absence from his post, a move which revealed a rare lack of solidarity within the ranks of the Catholic Church.

"It's a relief, of course, for Germany's Catholic Church," the chairman of the German Catholic Bishops' Conference, Alois Glueck, told German public radio. "The case has become a heavy burden."

"It's also a bit of a personal tragedy, considering the way in which Bishop Mixa has put himself in this situation through his own reactions to the problem," Glueck said.

Mixa had repeatedly denied any physical abuse against children during his time as a priest between 1975 and 1996, but later admitted that he couldn't rule out having given "the occasional slap" when working with children.

Victims maintain they were struck more robustly than the bishop's partial admission implies.

An investigation has also begun into allegations of financial irregularities, with the local Augsburger Allgemeine newspaper reporting ealier this month that Mixa used church funds to purchase antiques worth 70,000 Deutschmarks (35,000 euros, $46,800). 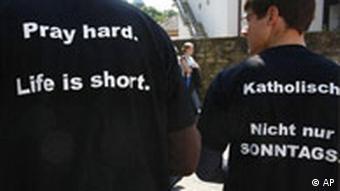 Many German Catholics are turning their backs on their church

In Germany, many people are official members of their church, and as such, they pay a "church tax" which is deducted directly from their monthly pay-checks.

More and more people have been leaving Germany's Catholic church this year, and these increases coincide with revelations of a string of sexual abuse scandals and the church's perceived failure to deal swiftly and openly with the cases.

Recent figures for Bishop Mixa's Augsburg diocese are yet to be published, but a sharp spike in departures is also expected there.

"You can't look at the church like a club which you can simply leave," Stephan Haering, professor of theology at the University of Munich, told Deutsche Welle. "Doing so is a statement about your personal belief."

Professor Haering doesn't think the string of problems surrounding the Catholic Church at the moment can entirely explain the sudden decrease in membership across Germany.

"Many people's relationship to the church and their faith had already weakened in the time running up to these scandals, and now, the problems present the opportunity to express this individual disillusionment by leaving the church." 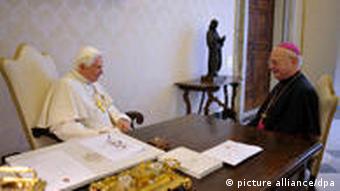 A change of approach?

Mixa wrote in his letter of resignation that he hoped his action would permit his diocese in Augsburg to make "a new start."

While his offer of resignation is yet to be approved by the pope, church analysts in Germany like professor Haering believe it could symbolize a change in the way the Catholic church treats its clergy.

"It really was an exceptional approach for the head of the Bishops' Conference (Archbishop Robert Zollitsch of Freiburg) and his colleagues from Munich and Freising who advised him to step back and to take a time-out. It's standard practice never to criticize a fellow bishop or to offer him such advice," Haering said.

On Thursday Archbishop Zollitsch said he respected the "difficult decision" that his colleague had taken.

"I don't see [his letter of resignation] as an admission of guilt," Zollitsch told reporters. "As I understand it, also after talking with [Bishop Mixa], he just wants to create the opportunity for a new start in his diocese in Augsburg."

Also on Thursday the pope accepted the resignation of a third Irish bishop in connection with a sex abuse scandal in that country.

German Bishop Walter Mixa has resigned amid charges that he physically abused teenagers at an orphanage. Mixa wrote to the pope after the head of German bishops' conference called on him to take a leave of absence. (22.04.2010)

Norbert Denef was abused by priests for seven years in Delitzsch, his home town. When he reported the matter in the 1990s, the bishop of Magdeburg threatened him with legal action if he didn't stay silent. (30.03.2010)