As the economic impact of Brexit begins to bite, British and EU officials meet for the third time to formally discuss the terms of the UK's exit from the bloc. No breakthrough on any of the thorny issues is expected. 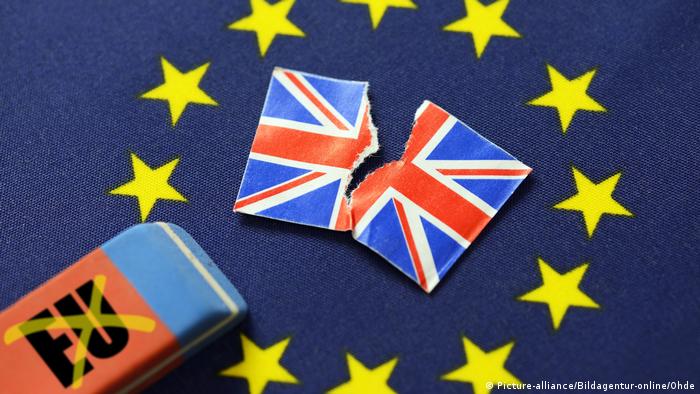 Negotiators from the European Union and the United Kingdom are meeting in Brussels from Monday evening for the third time to formally discuss the terms of Britain's departure from the bloc in March 2019.

The EU expects Britain to use the third round of talks to clarify its positions on a number of key issues concerning its separation from the bloc, which is necessary to move on to the second phase of talks about the future relationship between the country and the EU.

The two sides will discuss citizens' rights, a financial settlement, separation issues, such as goods on market and judicial cooperation in civil and criminal matters, governance of the agreement and the issue of Ireland and Northern Ireland, during this week's talks.

The EU says there has to be "sufficient progress" in three key areas - EU citizen rights, Northern Ireland's border and the exit bill - before it will turn to post-Brexit arrangements, possibly beginning in October.

The UK, though, is calling for more flexibility from Brussels and wants to begin discussions on London's post-Brexit relationship with the bloc, rather than just separation issues.

The talks take place amid continued turmoil in Britain, with the opposition Labour Party over the weekend backing a "soft" Brexit whereby the country remains in the EU's customs union and single market for a transition period.

After remaining surprisingly resilient following the Brexit vote last year, the UK economy appears to have hit a damper in recent months. The British economy expanded at half the rate of the eurozone's during the second quarter of the year, hit by a sharp rise in inflation that hurt consumers' purchasing power and slowed down consumption.

The UK's growth rate has now dropped to the lowest of the G7 group of industrialized economies. In July, the International Monetary Fund slashed the nation's growth forecast to 1.7 percent in 2017, from a previous projection of 2 percent.

Official inflation, meanwhile, stood at 2.6 percent in July, sharply up from just 0.6 percent a year earlier.

The deteriorating economic environment and growing uncertainties have led to investors adopting a more cautious approach with regard to doing business and pumping money into the UK.

Many German businesses, for instance, are beginning to shift investments away from Britain in anticipation of increased trade barriers after Brexit, the chief of the DIHK Chambers of Industry and Commerce said on Monday.

In a joint statement, the DIHK and the British Chambers of Commerce (BCC) called for British and European Union negotiators to deliver clarity and certainty for trading businesses across Europe in their negotiations on Britain's exit from the bloc.

"Businesses are very concerned that Brexit will have a major negative impact," Martin Wansleben, chief executive of the DIHK said in the statement, adding that Brexit could lead to additional bureaucracy, increased waiting times and stricter border controls resulting in higher costs.

"The terms of exit are still completely unclear. Many of our members are reporting that they are already shifting investments away from the UK in anticipation of these barriers," he added.

Businesses in both the UK and Germany want to see economic subjects rise to the top of the negotiators' agenda. They want both sides to quickly sort out their disagreements and put in place measures that ensure a smooth flow of trade.

About two dozen European cities have applied to host two London-based EU agencies after they leave the UK capital due to Brexit. Two German cities are among those that entered the race. (01.08.2017)

UK government ministers are to publish new papers setting out their aims for Brexit talks. Fourteen months after the referendum, there has been little progress in talks on the terms for the UK's exit from the bloc. (13.08.2017)

The current bout of uncertainty, businesses fear, is bad for their outlook. If there's no deal between the two sides, that could also mean companies facing higher costs and increased bureaucratic hurdles.

Dieter Kempf, head of the German industry association BDI (the Federation of German Industries), also criticized London's Brexit stance. "The British government still lacks a clear course of action," he said, stressing that it would be hard to make progress in such a situation.

In the run-up to the third round of negotiations, British officials released a flurry of position papers, but their EU counterparts complained that they were short on detail.

"The British proposals for customs processing involve disproportionately high bureaucratic hassles," said BDI chief Kempf. "These ideas are lacking in practical relevance. The UK must finally be clear on how it intends to pursue Brexit," he underlined.

Both sides have repeatedly warned that the clock is ticking down to the March 2019 Brexit deadline and that they are the ones doing their best to make progress.

UK Prime Minister Theresa May has been under pressure to back away from her stance that "no (Brexit) deal is better than a bad deal" since losing her governing Conservative Party's parliamentary majority in an election in June.

As for Britain's divorce settlement - estimated at up to 100 billion euros in Brussels but much less at 40 billion according to reports in London - EU officials said the talks were not about fixing a number but about agreeing how to work out the bill. Teams from both sides are set to conclude the talks on Thursday.