The 12-passenger jet was thrown into a freefall over the Arabian Sea due to so-called "wake turbulence" from an Airbus A380. The January incident which only become public recently left one passenger seriously hurt. 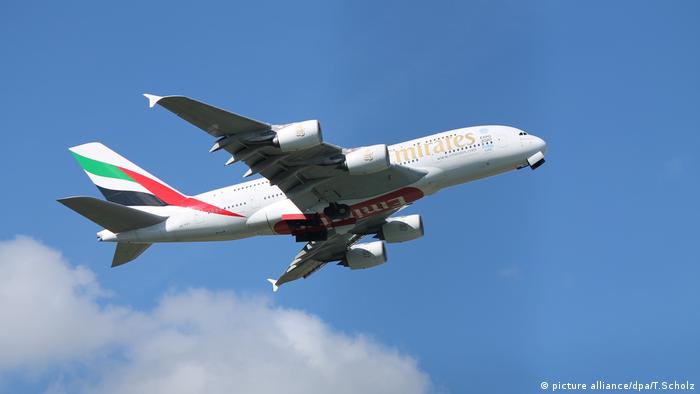 A German business jet was flipped at least three times and thrown into an uncontrolled descent when an Emirates jet flew too close, respected aviation news outlet "Aviation Herald" reported.

An Emirates Airbus A380-800 from Dubai to Sydney reportedly flew just 1,000 feet (300 meters) above a Canadair Challenger 604 operated by Munich firm MHS Aviation. The incident took place near Oman.

The resulting turbulence threw the small jet with nine passengers into a 10,000-foot (3048-meter) freefall, shutting down both engines, the website reported.

Dozens of tourists were evacuated by helicopter Thursday from shelters at the top of a volcano on Spain's Tenerife island where they spent the night after being plucked from two cable cars that stopped mid-air. (17.03.2017)

The crew then managed to recover control and made an emergency landing at Muscat airport, with one seriously injured passenger. The plane was written off due to the damage and several passengers were hospitalized, the report said.

Details of the January incident will be covered in an upcoming report from the German Federal Bureau of Aircraft Accident Investigation, but the "Aviation Herald" was able to publish details of the incident earlier.

MHS said it was unable to comment due to an ongoing investigation.

The company runs a fleet of 24 aircraft and is the largest executive charter operator in Germany, according to its website.

The "Aviation Herald" saw alerts to air traffic controllers to be particularly careful of A380s crossing above other flights.

So-called "wake turbulence" from A380s has caused a number of incidents in aviation recently, including when an Air France A320-200 was violently jolted by an Emirates A380 near Frankfurt airport.