Pope Benedict XVI walked alone under the infamous "Arbeit Macht Frei" gate at the former Nazi death camp at Auschwitz-Birkenau as he began a poignant visit to the site where Hitler's Germany killed 1.1 million people. 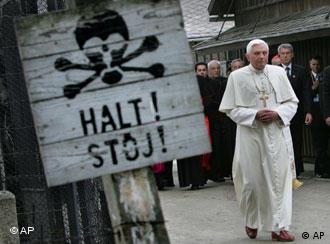 The pope met with former prisoners at Auschwitz

As church bells rang in the southern town of Oswiecim -- the Polish name for Auschwitz -- a solemn Benedict, his hands clasped in prayer, walked in silence the 200 meters (yards) to the execution wall wedged between prisoner blocks 10 and 11 where the Nazis summarily shot thousands of prisoners. His face grave, Benedict stood a few moments in prayer, removing his hat before bowing solemnly and placing a bowl containing a lighted candle before the grim wall.

The 79-year-old pontiff then greeted a line of 32 survivors, men and women, who were waiting to meet him. Some grasped his hands warmly, some knelt to kiss his papal ring, many seemed eager to thank him for visiting the camp. Benedict clasped the hands of the first survivor waiting in line, a woman, wearing the striped scarf that Polish political prisoners wore at the camp.

Passing down the line, an elderly Polish man kissed the pope on both cheeks, a gypsy survivor of the camp pressed the pope's hand to his lips. Henryk Mandelbaum, 83, wearing the distinctive striped cap of the Sonderkommando -- Jewish prisoners who emptied the gas chambers where their fellow Jews perished -- kissed the papal ring. 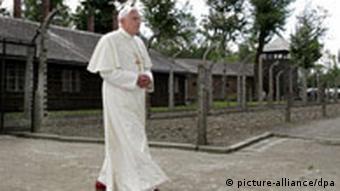 The pope, who earlier said he would visit Auschwitz camp as a "son of the German people," was later expected to utter a prayer in German for the victims of Nazi brutality.

Benedict, a member of Hitler Youth as a teenager, afterwards descended into the bowels of the grim barracks to pray before a lighted candle in the cell where Catholic priest Maximilian Kolbe died in 1941. Kolbe had offered to take the place of a prisoner whom the Nazis had sentenced to death by starvation.

Benedict, on the last day of a four-day visit to Poland, was later to recite a speech expected to focus on reconciliation between Germans and Poles after more than 60 years of distrust caused by the German occupation of the country during World War II.

It was Benedict's third visit to Auschwitz. As Joseph Ratzinger, archbishop of Munich, he accompanied the Polish-born John Paul II during his first visit to the camp as pope in 1979. A year later, he came as part of a delegation of German bishops. 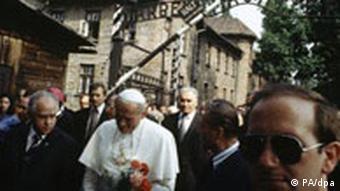 Poland became "a place of special witness to the faith" when Benedict's predecessor John Paul II was elected pope in 1978, he said in his homily during the nearly three-hour mass in a park in the southern city.

"You were called to give this witness before the world," the pontiff said, adding that Poland's strong Catholicism had become "perhaps even more urgent than ever" with the death of John Paul II last year.

Ahead of the expected solemnity of the Auschwitz visit, the morning mass was a joyous celebration of Benedict's visit. The 900,000 turnout was the biggest since the pontiff began a pilgrimage in the footsteps of John Paul II on Thursday, surpassing the 600,000 young people who flocked to the park the night before to join him for a prayer meeting. Tens of thousands had camped out overnight in tents or lay on the ground in sleeping bags in the 48-hectare (119-acre) field.

The pontiff was welcomed to the Blonia park with hymns, cheers and shouts of joy as his popemobile slowly made its way through the dense crowd before he celebrated mass on a giant, flower-bedecked altar. From the joyous, flag-waving welcome, the crowd stilled to hear Benedict's mass, the second and final open-air service during his Polish pilgrimage. 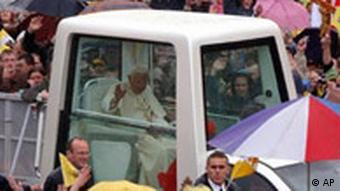 The popemobile in Warsaw

"You must be strong with the strength of faith. You must be faithful. Today, more than in any other age, you need this strength," Benedict exhorted them in his homily, repeating the words of his predecessor during his first mass in Krakow as pope in 1979.

Poland is seen as a bastion of Roman Catholicism in an increasingly secular European Union, where the Church is pitted against a growing body of legislation it sees as threatening traditional Christian values.