A top representative of Germany's arms industry says production may have to be moved abroad in the face of dwindling domestic sales and export restrictions. Thousands of jobs could be at risk. 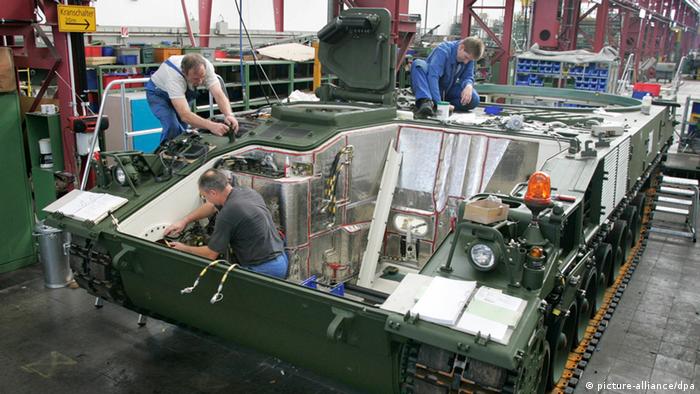 The president of the Federation of German Security and Defense Industry, Armin Papperger, on Saturday said that the restrictive weapons export policy of the German government, coupled with reduced domestic demand, could lead to the arms industry moving its production abroad.

"Either we will continue to reduce capacities and thus jobs as well - or we'll go abroad," Papperger, who is also the CEO of military technology group and automotive parts supplier Rheinmetall, told the daily Süddeutsche Zeitung.

Papperger said that all large arms companies were reviewing whether they could stay in Germany or not.

"When my country doesn't buy from me while at the same time telling me I'm not allowed to export, I can't go on for long," he told the paper, adding that "Switzerland, France or the USA would be happy if we invested there."

German Economy Minister Sigmar Gabriel has announced plans to impose tighter restrictions on German weapons exports to non-European Union and non-NATO countries, citing conflicts in Ukraine and the Middle East as possible arenas for the misuse of imported arms.

Among other things, Gabriel has stopped the export to Russia of a combat training center manufactured by Rheinmetall.

Papperger said he would be negotiating with the Economy Ministry over compensation for the losses incurred by his company, putting the worth of the contract at 135 million euros ($173.2 million).

At the same time, he denied reports that large sections of the center had already been delivered.

"It is all standing around at one of our factories in Bremen, packed up and ready to go in more than 70 completely loaded trucks," he said.

Gabriel is to hold further talks with representatives of the arms industry in November to discuss how financial and job losses can best be avoided.