George Soros ′won′t butt out′ on Brexit after UK press hounding | Europe| News and current affairs from around the continent | DW | 12.02.2018

The Hungarian-born financier has defended donations to a pro-EU group after being accused of trying to undermine Brexit. The controversy saw two sister newspapers at odds and a top broadsheet accused of anti-Semitism. 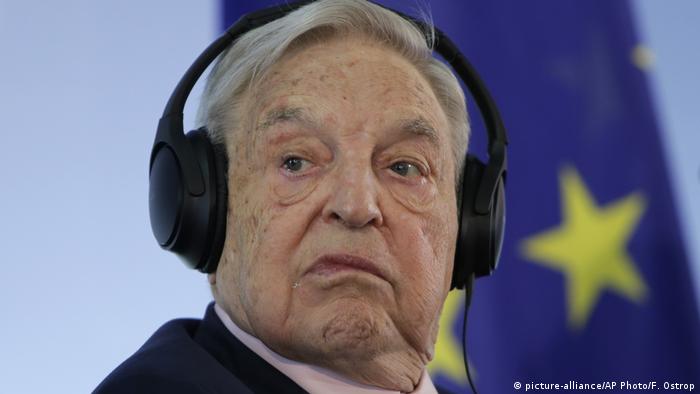 The billionaire George Soros hit back on Sunday after a week during which the UK's Brexit-supporting press called him a foreign interloper mixed up in a "secret plot to thwart Brexit" for his funding of the Best for Britain campaign to keep the country in the European Union.

"I WON'T BUTT OUT" — the Mail on Sunday's page lead read, with a strapline explaining that Soros' "love for Britain" would see him fight on to oppose the UK's exit from the European Union.

It was a direct rebuttal of a front-page editorial headline in the Mail on Sunday's weekday stablemate The Daily Mail on Friday: "Butt out, Mr Soros. You can keep your tainted money."

In his piece, Soros declared himself a "confirmed Anglophile." With the help of false papers, the 87-year-old survived the Nazi occupation of Hungary in World War II before fleeing to Britain when his native country came under communist rule.

"I am a proud supporter of Best For Britain, a group that wants Britain to remain a member of the European Union," Soros wrote. "I consider Brexit a tragic mistake."

His comments came after the right-leaning broadsheet The Daily Telegraph published an article referring to the Jewish financier as "The Man who Broke the Bank of England" and painted him as the paymaster of a clandestine plot to undermine the result of Britain's 2016 referendum.

The "Remain" camp in the Brexit debate cried foul, saying the accusation smacked of anti-Semitism. Particularly egregious, some pointed out, was the use of the term "secret" to describe Soros' support for what was an open publicity campaign against Brexit.

Soros' donations to pro-democracy and pro-refugee NGOs have made him into a hated figure in some milieus in eastern Europe, and he has also been demonized by far-right English-language media sites such as Breitbart. As such, the authors of the Telegraph piece — in particular, co-writer Nick Timothy, a former close adviser to British Prime Minister Theresa May — were accused of, knowingly or not, promoting anti-Semitic tropes.

Timothy's fellow "Leave" supporters" came out to defend him in their droves, accusing opponents of stoking a fake row about anti-Semitism. And the Campaign Against Antisemitism determined that though the Telegraph's headline writers had chosen their words poorly, the tone of the article itself was fine.

The story was picked up by populist-right Brexit-supporting newspapers such as The Sun and the Daily Mail. But the vilification of Soros, particularly by The Sun, owned by the American-Australian billionaire Rupert Murdoch,  drew allegations of hypocrisy, given the influence the tabloid may have had on the Brexit vote.

Former British Finance Minister Norman Lamont was among those who criticized Soros, pointing out that foreign donors had been banned from giving money to either the "Remain" or "Leave" campaigns before the 2016 referendum. Funding an anti-Brexit campaign even after the vote represented a breach of the spirit of the law, Lamont said.

The men have a history. Lamont presided over the Bank of England in 1992 when the pound sterling crashed out of the European Exchange Rate Mechanism, a precursor to the euro. Ironically, Soros had been one of the investors who precipitated that collapse by betting against the overvalued pound.

Though Soros didn't address the anti-Semitism claims against the Telegraph, he did point out that The Sun, despite its foreign ownership, had engaged in advocacy.

"While former Chancellor Lord Lamont might criticize my involvement as a foreigner, it might help him to know I also have long had businesses in Britain — in much the same way as has Rupert Murdoch, an American citizen and well-known Brexiteer," Soros wrote.

"The good thing is that both of us 'foreigners' have been more than happy to bring jobs to the UK economy," he added.

What perhaps surprised people most about Soros' response is the paper in which it was printed: the Mail On Sunday. It seemed something of a departure, given the pro-Brexit stance of the paper's editor-in-chief, Paul Dacre. However, the Sunday edition boss, Geordie Greig, enjoys considerable autonomy from him.

The point was not missed by Telegraph correspondent James Rothwell, who noted that the two papers now followed completely different editorial lines.

Indeed, the Mail on Sunday was pro-Remain at the time of the Brexit referendum. Dacre and Grieg are understood not to see eye to eye.

The Hungarian election campaign has turned toxic after a Fidesz party politician posted a photo of a slaughtered pig with George Soros' name on it. Ahead of the vote in April, the rhetoric has reached a new low. (13.12.2017)