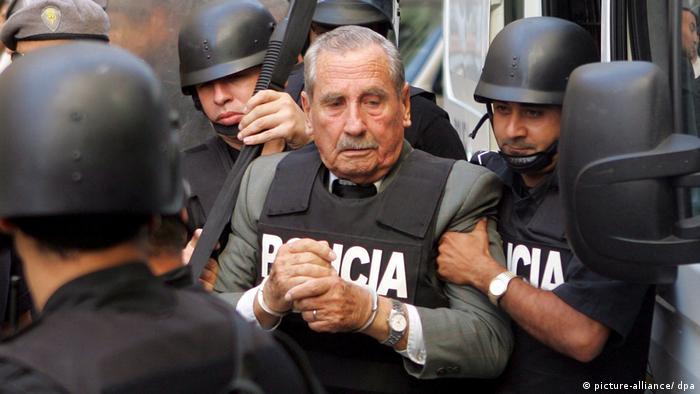 Gregorio Alvarez died at the Central Hospital of the Armed Forces in Montevideo, the military's health services said Wednesday.

Rights activists called on Uruguayans to mark his death by remembering the victims of his regime.

"With the greatest respect, a rapist, a murderer, a torturer, a 'disappearer' doesn't redeem himself by dying," said Oscar Lopez Goldaracena, a lawyer who was part of the prosecution team against Alvarez.

"The first thing I thought is, he died with the secret of all the people he 'disappeared' and killed," activist Beatriz Benzano told news agency AFP. Benzano was one of the 28 women imprisoned by Alvarez's regime who in 2010 publicly accused their jailers of sexual assault.

"Kidnapping children, robbing babies, disappearances, raping men and women.... He had an interminable list of crimes," she said.

From army chief to president

The son of a general, Alvarez played a central role in the 1973 coup that dissolved Uruguay's congress and installed a military regime. He then rose through the military ranks, becoming army chief in 1978 and finally taking over the presidency in 1981.

The death of his brother Artigas, an army colonel killed by the leftist Tupamaro guerrillas in 1972, is said to have shaped his brutal hard-line stance.

Under Alvarez, Uruguay became part of a secret alliance of South American dictatorships known as Operation Condor, in which dictators and military leaders cooperated in persecuting and killing one another's dissidents.

Historians attests that some 180 Uruguayans were killed under Alvarez, most of whom while in the custody of the government's Argentine allies. Thousands more people, namely suspected leftists, are said to have been arrested and tortured.

In 1985, as dictatorships in the region were beginning to recede, Alvarez conceded to swelling protests pressing for free elections. He agreed to turn the government over to Uruguay's Supreme Court, returning the country to a democracy. Uruguay's military rule ended one year after Argentina, and one year ahead of Brazil.

In 2009, he was found guilty for his role in the abduction and murder of political opponents and was sentenced to 25 years in prison.

Alvarez maintained to the end of his life that he knew nothing of the illegal abductions and killings, a claim quashed by prosecutors who argue that he must have known given his position as commander-in-chief and later as de facto leader.

Uruguay is today governed by a leftist coalition made up of former Tupamaro guerrillas and other former opponents of Alvarez's military regime.