A gay pride parade scheduled for Sunday in central Belgrade has been cancelled after police said they couldn't guarantee the marchers' safety. 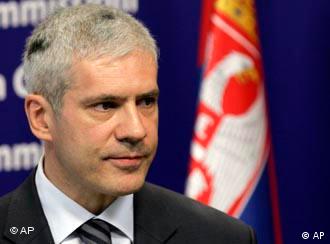 Serbian President Tadic had initially promised to protect the demonstrators

The decision by the organizers to call off the parade was made after Prime Minister Mirko Cvektovic said the police had advised changing the venue from the main streets to a field for reasons of safety. He added that the police would not be able to guarantee their safety.

Serbian President Boris Tadic had on Friday promised to protect the activists at the planned gay pride parade.

The last gay pride event in Belgrade – held nearly a decade ago – ended in a violent battle, and this year, nationalist and right-wing groups threatened a repeat attack.

However, organizer Dragana Vuckovic rejected the suggested venue change, telling the AFP, "that would be unacceptable for us."

"The message of equal rights is transmitted symbolically when a group on the margins is able to parade in the center of the capital," said Vuckovic.

Nationalists welcomed the cancellation of the event, calling it a defeat for "infidels and Satanists".

The parade was expected to attract up to 1,000 people, including a number of public figures, foreign diplomats, and activists from neighboring countries. Some analysts say the event could have been an opportunity for Serbia to present itself to the world as a tolerant and open society, as it prepares its bid for EU membership.

Gay pride organizers are calling on the government to launch an investigation to identify those responsible for making threats against the march.

Government plans to curb tabloid excesses in Serbia touch a raw nerve in a country where press freedom was stifled under the repressive regime of Slobodan Milosevic. (30.07.2009)

Most Serbs want to join the European Union, but are sick of what they consider European "blackmail," according to a recent survey. (22.01.2009)