Gamescom: ′Virtual reality is only an interim solution′ | Science| In-depth reporting on science and technology | DW | 19.08.2016

Gamescom: 'Virtual reality is only an interim solution'

Virtual Reality is THE hot topic at the computer games fare Gamescom in Cologne. Special glasses are seen everywhere on the fairgrounds. But they are just a stop on the way to the ultimate gaming experience.

Virtual Reality (VR) is not really new - neither to the world of gaming, nor to other parts of our computer-based life. And from time to time, VR catches a lot of public attention. But it hasn't really arrived in our daily lives, yet.

"This is changing now," Maximlian Schenk is convinced.

Schenk is the managing director of the German Association for Interactive Entertainment Software (Bundesverband Interaktive Unterhaltungssoftware - BIU) and a co-organizer of the world's biggest computer games fair, the Gamescom.

According to the BIU, every second German knows what VR is and one in five are thinking about buying VR glasses. 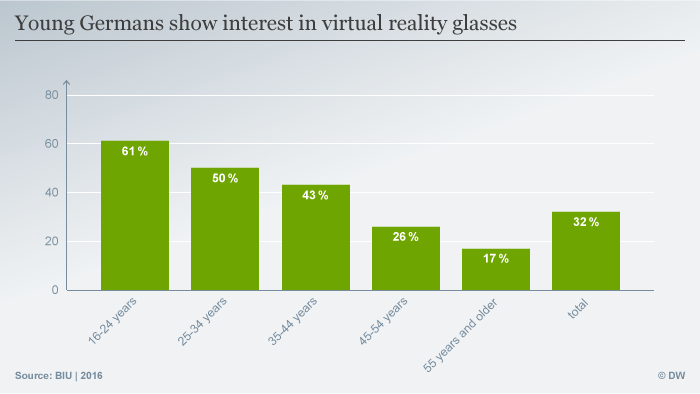 Schenk might be right with his prediction - at least judging by the impression one gets when roaming the Gamescom fairgrounds: Wherever the data-goggles are exhibited, long lines of interested people are forming immediately. And that was the case even before the official opening, when only the media and professionals were allowed in.

Oculus, Samsung, HTC, Sony - all of the relevant companies are offering their latest gadgets. Countless VR glasses are ready for use at stylish booths. But in the end, they are still not enough for the throngs of interested people.

It seems like everybody wants to experience the free-climbing adventure "The Climb." The game, developed by the German gaming software company Crytek offers couch potatoes the feeling of free climbing steep cliffs. And that's not only something for the eyes: In addition to the Oculus Rift goggles, the user receives a touch controller. That's a handle equipped with sensors, which allows the gamer to move around intuitively and with high precision in the virtual world.

Also from Crytek is "Robinson: The Journey." The player of the game takes the role of 12-year-old boy Robin, who has landed on a mysterious planet and has to fight his way through a jungle inhabited by dinosaurs. Robin has to climb up lianas and is rewarded with breathtaking views from hilltops.

Beautiful, but not surprising

Strictly speaking, one of the highlights at the Gamescom is not only virtual reality. At the virtual roller coaster ride, Samsung tricks passengers with movable chairs - which adds a lot to the feeling of really racing through loopings at incredible speeds.

However, there are few real surprises at the fair. The main message to consumers is: VR glasses are becoming affordable. But there are also high-end products, such as Oculus Rift - for which not everybody may be willing to cough up 700 Euros.

Alternatively, there are head mounted displays (HMD), in which the smartphone becomes the display (for example Samsung Gear VR for about 100 Euros). And then there is the even cheaper model, which users have to put together themselves, like Google's Cardboard VR for about 20 Euros. And even that one should be sufficient for an initial VR experience.

What comes after VR?

Whoever expected to see more Augmented Reality (AR) at the fair - following the huge success of Pokemon Go - will be disappointed. And that is not only due to the fact that the Gamescom is a Pokemon free zone, because the fairgrounds are listed as a private space without Pokestops.

Even other AR-applications are rare. When asking the exhibitors about it one learns that this will change in the future. There are lots of other mobile-phone games on the market - but they don't use AR. Still, gaming on the smartphone is second only to VR as a hot topic at the Gamescom.

Let's take a look into the future and ask someone who has to know. Patrick O'Luanaigh is manager of nDreams, a British games developer specializing in virtual reality. Does he think that VR will one day take over the world?

Using technologies in a different way

"I was growing up in the 1970s and I was watching TV most of the time. The kids are out playing Pokemon Go now. My daughters went out over the weekend, and we did a ten kilometer walk, collecting Pokemon," O'Luanaigh recalls. "Now, I know they're getting their phone out occasionally, but they are out and enjoying the wild. And that's why I think the ultimate destination for VR is where augemented reality and VR come together." 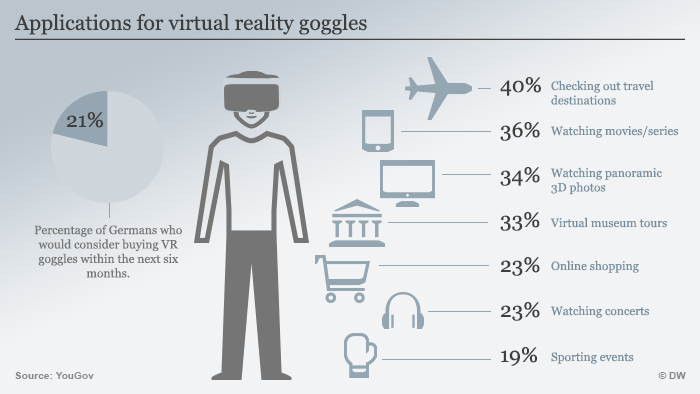 "You will see headsets, that are much smaller - the size of a pair of Ray-Ban glasses, where you can alternate as you like between Pokemon Go type stuff and VR and switch them and actually be in another world when you want to," O'Luanaigh believes.

In real life, he argues, the right balance is important, especially when it comes to influencing the gaming habits of your kids. Besides, VR and AR also offer great opportunities for education and learning.

Pokemon Go is a very simple version of AR, O'Luanaigh says. But this is going to change in the coming years: "The new type of augmented reality actually scans the environment, looks out where things are and can display characters, interacting with us." It's going to be "very cool," he predicts.

What's ten years down the road?

Vincent Wedow from the hardware trading platform Alternate agrees. "Virtual reality is only an interim solution on the way to augmented reality," he says. While there is still a lack of devices and practical applications, Wedow is convinced that AR will follow soon. "In ten years we will have a holodeck - no doubt!"

Amid increased security and heightened expectations, the Gamescom video game trade fair takes over Cologne this week. A major theme will be virtual reality gaming, with Sony planning to preview a new toy. (17.08.2016)

Virtual Reality: a revolution in film

The film industry is now experimenting with techniques allowing movie-goers to delve into a new world. The viewer can become completely immersed in the film and decide independently on aspects such as the viewing angle. (03.08.2016)