Sigmar Gabriel travels a lot. He recently visited Egypt and Morocco, now he's off to Iran. Now that many Western sanctions have been lifted, German firms are hoping to cash in. But some Germans oppose closer relations. 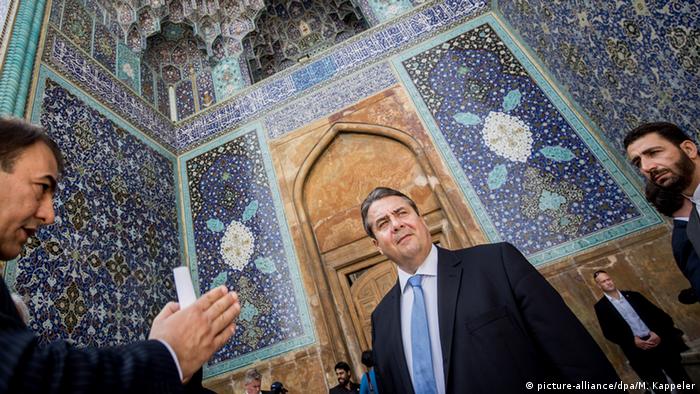 Following the relaxation of some Western sanctions, Iran is embracing its role as a regional hegemon and not shying away from direct conflict with Saudi Arabia. But it's also a country with lamentably decrepit infrastructure and a strong desire for Western know-how, particularly of the kind that leads to long-term cooperations.

That's why 150 business representatives are joining German Economy Minister Sigmar Gabriel as he travels to Tehran this Monday. "We see great potential for closer cooperation, especially in the fields of mechanical engineering or renewable energy," a spokesman for Gabriel said.

Gabriel (pictured above during his last visit to Iran) became one of the first Western politicians to visit Iran shortly after the historic resolution of the years-old nuclear dispute with the Islamic Republic. Even back then, Gabriel didn't mince his words: A trip to this strict Muslim country is never without controversy. Thus Germany must make utterly clear: "Whoever has sustainable relations with us, they may never call Israel's right to exist into question," Gabriel said at the time.

The youth organization of Gabriel's Social Democrats, the Young Socialists, however, views the minister's trip critically. Branches in Lower Saxony and Berlin distributed a statement that called for the trip to be canceled. "He who makes deals with an anti-Semitic dictatorship that threatens Israel with annihilation and is a world leader in human rights violations, is complicit," the statement read.

In fact, Amnesty International has recently alleged that the number of executions in Iran have increased dramatically in the last year. A spokeswoman for Gabriel was quick to mention on Friday that Gabriel had met with Amnesty representatives to discuss Iran's human rights situation.

The trip will be a balancing act for Gabriel. On the agenda are business talks, but also meetings with various government representatives. It's unclear yet whether the German economy minister will also be able to see President Hassan Rouhani.

But the minister will no doubt focus on finding out about business opportunities for German companies in Iran. Experts estimate the trade volume between the two nations will hit 6 billion euros ($6.86 billion) in two years, twice as high as now. German exports to Iran were worth 2 billion euros in the past few years, as Tehran tends to import more and more from China.

Let's not forget that sanctions have not fully been lifted as yet. Above all, Americans continue to be cautious and think twice before striking business deals with the country. German companies have to look hard to find banks to finance their deals with Iran as lenders fear possible punitive action on the part of the US.

Also, Iran is sitting on old debt, with leaves German companies wondering whether the German state would be willing to help with government export credit guarantees. Hence German business leaders are rather restrained.

Speaking for the machine tools sector, I cannot confirm the open euphoria seen elsewhere about possible deals with Iran," said Klaus Friedrich from the VDMA engineering association. Most of our members have had ample experience with their Iran business; they're positive about it, but a lot more realistic than others."

The German government's coordinator for transatlantic relations, Jürgen Hardt, is also cautious when it comes to doing business with Iran. He said it would be premature for Chancellor Angela Merkel to visit Iran as long as the country puts a "Greetings to Israel" label on its rockets.

"If the Iranian president were to seize the occasion of a trip to Germany to officially acknowledge Israel's right to exist, it would exactly be the right place to do so," Hardt argued. This makes it abundantly clear that there may be hopes for good business, but bilateral relations will remain difficult medium-term.

German Foreign Minister Steinmeier to travel to Iran in October

German Foreign Minister will visit Iran in October, as relations between Tehran and the West continue to thaw following the nuclear deal. Steinmeier said the deal means not less, but more security for the Middle East. (24.08.2015)